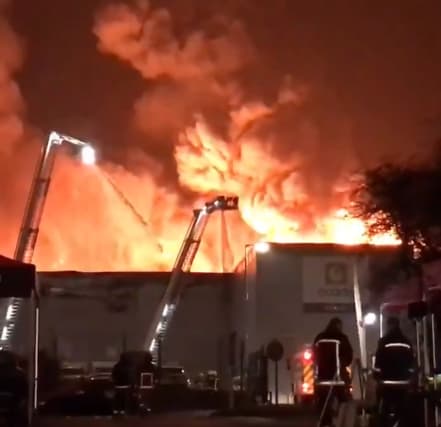 Up to 400 jobs are at risk at Ocado after a huge fire destroyed the online retailer’s Andover warehouse.

The FTSE 100 company said the distribution site, which was decimated by the four-day fire in February, would take two years to rebuild.

It is now consulting with picking and packing staff from the site about potential redundancies after failing in efforts to find a replacement site nearby.

The consultation will affect almost half of the 850 workers based at the site.

An Ocado spokesman said: “In light of the fact that the rebuild of Andover CFC will take at least two years to complete, it is with immense regret that we have commenced a formal consultation process.

“We would like to thank all of our colleagues for their hard work and we will provide them with all the support we can during this process.

“We are committed to rebuilding and restoring our operations in Andover and sincerely hope that we are able to welcome any affected colleagues back to Ocado in the future.”

It emerged last month that the warehouse fire was caused by an electrical fault at one of the first-generation battery charging units at the edge of an ambient storage grid.

This caused the plastic lid on the top of a grocery-carrying robot to catch alight.

Daniel Adams, national officer for the Usdaw union, which represents workers at the site, said:

“Clearly the staff are devastated by this development, particularly as they have spent the last three months helping to keep the business going after a fire gutted the Andover site.

“Full and meaningful consultations are ongoing with the company, with a view to minimising redundancies and mitigating their impact.

“In the meantime we will continue to provide our members with the support, advice and representation they need at this very difficult time.”