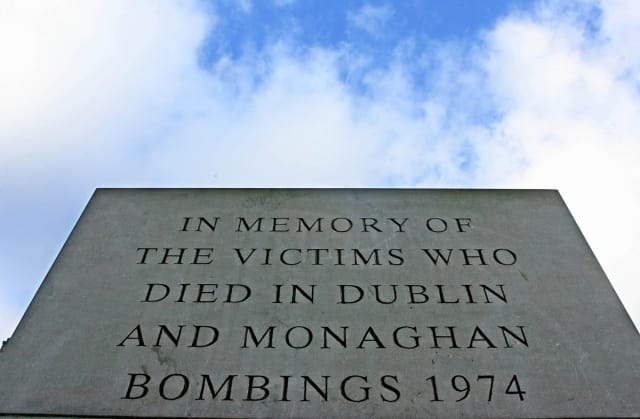 Victims’ families and survivors of the Dublin-Monaghan bombings have called for full disclosure of all sensitive documents relating to the atrocities.

It comes as the Irish Government emphasised to the British Government the need for action to progress issues relating to the bombings.

A wreath-laying ceremony took place on Friday at a Dublin memorial to remember the 33 people killed by loyalist bombers.

It marked the 45th anniversary of the blasts, when paramilitaries detonated four no-warning bombs in Dublin and Monaghan on May 17 1974.

Their families want the British Government to release classified security files relating to the deaths.

The Justice for the Forgotten lobby group has fought a long-running campaign for an open inquiry into allegations that British security agents colluded with the terrorists to plot the co-ordinated and sophisticated attacks.

There have also been calls for the Irish Government to release “secret files” about the attack.

Martha O’Neill, the widow of victim Edward O’Neill, told the BBC that files deposited with the Irish premier’s office could assist families.

Irish Justice Minister Charlie Flanagan told those gathered at Friday’s commemoration that he appreciated it was “another difficult day for each person who is here to remember loved ones lost in the atrocity” as well as those injured in the bombings.

He said ordinary people going about their daily business on that day had been “callously and brutally attacked” like others caught up in the Troubles.

He said the Government would “persevere relentlessly” in its efforts to seek the truth behind the events.

“The Government has worked consistently on all-party motions which call on the British Government to allow access by an independent international judicial figure to all of the original documents in their possession,” he said.

“I know that you’re frustrated that these motions have not yet been adequately responded to. I want to assure you that we will not give up in our efforts.”

Mr Flanagan said the Government had raised the matter earlier this month with UK Cabinet Office Minister David Lidington and Northern Ireland Secretary of State Karen Bradley at a meeting of the British-Irish Intergovernmental Conference.

“We were clear in our call of the urgency of progressing this matter and the need for a concrete response from the British Government,” he said.

Mr Flanagan laid a wreath on behalf of the Government at the event.

A minute silence was held and prayers were led by Fr Tom Clowe and Reverend Trevor Sargent.

An oration was delivered by author and Bloody Sunday relative Julieann Campbell, and Rachael Hegarty read one of the poems from her new collection, May Day 1974.

Dublin Lord Mayor Nial Ring told those gathered on Talbot Street that he vividly remembered the day and the sense of fear it created.

“We were playing football on the street in Ballybough and heard the Dublin bombs exploding,” he said.

“My mother was working in Olhausen’s Butchers at the time and, although I was young, I recall the sense of anxiety and fear in the whole area as people waited for loved ones to come home.

“My mam did – unfortunately many others did not.”

Dublin mother Maeve Taylor and her three daughters were among those injured in the attack.

The family had been in the city shopping for Holy Communion shoes when the bombs were detonated.

Ms Taylor, now 92, attended  Friday’s commemoration with her daughter Michele Keane to lay a wreath for the victims.

She said she had never missed a commemoration.

Ms Keane, who was 11 at the time, said: “I get shivers every time I come up the street.”

“We heard the first bomb and mum had a big black coat on and she looked to the right, and she saw a car with a gas tankard with nails sticking out of it. She just wrapped us in this big black coat and said run,” she recalled.

“We had only got ten yards and it blew up.”

Ms Keane said they wanted both the Irish and British governments to release any information they have, so the families could get the justice they deserve.

“I can’t see it happening any day soon though,” she said. “It’s been 45 years now and it hasn’t been released.

“We would like answers, but in saying that, a lot of the perpetrators apparently aren’t around any more.”