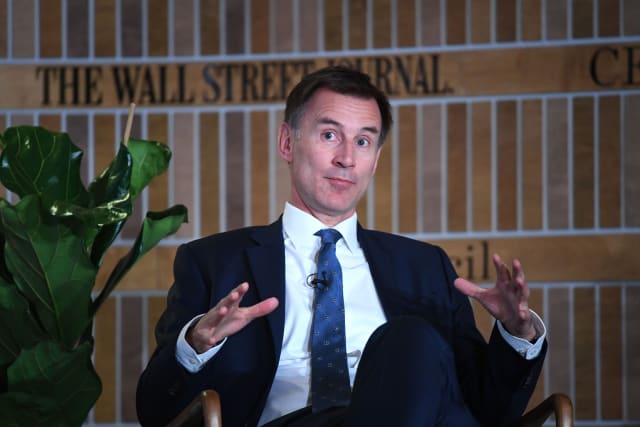 The UK and US both believe there is a “heightened threat” posed by Iran, Jeremy Hunt said as he intervened in a transatlantic spat over the response to Tehran.

The Foreign Secretary said he had discussed the situation in recent days with US counterpart Mike Pompeo and “as always we work closely” with Washington.

Meanwhile, UK officials said the security of deployed personnel in Iraq was kept under “constant review” following reports the threat level had been raised because of tensions in the region.

It comes amid fears Donald Trump’s administration is sliding towards war with Iran following the deployment of a US aircraft carrier and B-52 bombers to the Gulf.

A Ministry of Defence spokesman said: “We keep the security of our deployed personnel and assets under constant review.

“There is a range of threats to UK and coalition forces in this part of the world: that is why we have a very robust range of force protection measures.

“The UK has long been clear about our concerns over Iran’s destabilising behaviour in the region.”

It is understood the Foreign Office also keeps its security posture “under regular review”.

A small number of additional staff in London have been allocated to work on the Iran situation.

A Downing Street spokeswoman said the Foreign Office had “adapted their staffing” during “what they describe as a period of increased focus”.

Mr Hunt said he had discussed the situation with Secretary of State Pompeo during talks in London last week and Brussels on Monday.

“We share the same assessment of the heightened threat posed by Iran,” he said.

“As always we work closely with the US.”

There was a public clash this week between the Pentagon and the Ministry of Defence (MoD) over doubts expressed by a British general about the potential threat Iran poses to the US and its allies.

Major General Chris Ghika, a senior British officer in the US-backed coalition fighting Islamic State (IS), said: “No, there’s been no increased threat from Iranian-backed forces in Iraq and Syria.”

He told reporters at the Pentagon that the coalition monitors the presence of Iranian-backed forces “along with a whole range of others because that’s the environment we’re in”.

But he added: “There are a substantial number of militia groups in Iraq and Syria, and we don’t see any increased threat from any of them at this stage.”

The MoD said Maj Gen Ghika’s comments “are based on the day to day military operations” and his “sole focus is the enduring defeat” of IS.

He made clear in his Pentagon briefing that “there are a range of threats to American and coalition forces in this part of the world” and “there always have been, that is why we have a very robust range of force protection measures”.