Torrid two weeks ahead for Theresa May 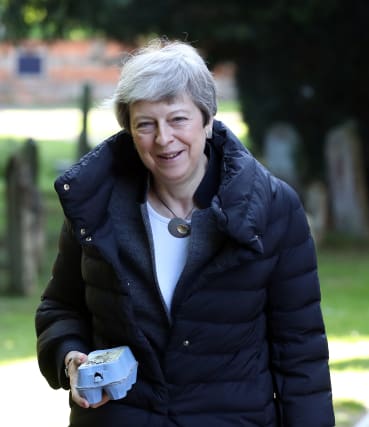 After Theresa May survived another attempt by Tory MPs to try to force her to set a firm departure date, the Prime Minister is facing a torrid two weeks that could define her premiership.

Britain will go to the polls to vote in European Parliament elections which the Government did not want to take place, but was forced by the EU to hold in order to gain a Brexit extension until the end of October.

As voting takes place across the EU on various days, the results will not start to emerge until late on Sunday May 26.

With the Commons in recess for the rest of the week, some leading Tory Eurosceptics believe they will have enough time to organise a move against Mrs May if polls are proved right and the Conservatives take a hammering from Nigel Farage’s Brexit Party.

The Government plans to bring its key Brexit legislation, the Withdrawal Agreement Bill (WAB), to the Commons for its second reading.

The move is intended to pave the way for a fourth attempt to get the Brexit deal through the Commons and on to the statute book by the time MPs break for the summer recess, expected to be in late July.

But, while cross-party talks with Labour on a possible Brexit compromise continue, it is far from clear if Mrs May has the numbers needed to back the WAB.

As if Mrs May did not have enough on her hands domestically, US President Donald Trump will make a three-day state visit to the UK.

Mr Trump’s controversial trip to Britain last year proved a tense affair as he appeared to trash the Prime Minister’s Brexit stance in a newspaper interview on the day of his arrival.

The state visit will coincide with a range of national events marking the 75th anniversary of the D-Day landings.

Voters go to the polls in Peterborough in a by-election to find a replacement for MP Fiona Onasanya, who lost her seat through a recall petition after serving time in prison for lying about a speeding offence.

Labour narrowly won the seat in 2017 but the Brexit Party is looking to pull off a political coup.

Mrs May will meet again with 1922 Committee chairman Sir Graham Brady to agree a timetable for the Tory leadership contest after the second reading of the WAB – whether it passes or not.

Then the country should finally have a firm date for Mrs May’s resignation.