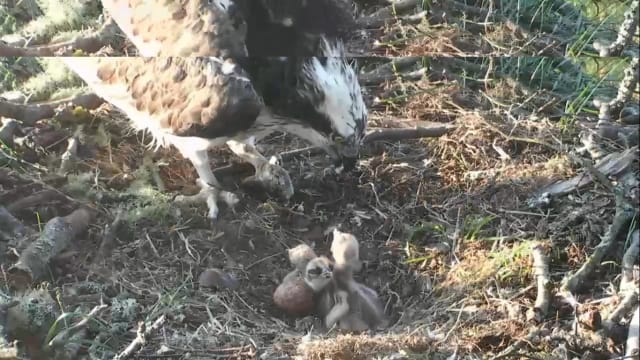 The third and final chick of the season has hatched at a Scottish wildlife reserve.

The chick emerged from its shell at 5.12am on Thursday, watched by staff and webcam viewers from around the world.

It emerged around 20 hours after people noticed signs that the egg was hatching at the Loch of the Lowes reserve in Perthshire.

The first chick of the season hatched at about 7.20pm on Saturday followed by the second chick around 24 hours later.

The latest arrival is the 13th chick for female osprey LF15, known as Lassie, and her mate LM12, known as Laddie.

Sara Rasmussen, Perthshire ranger at the Scottish Wildlife Trust, said: “Thanks to players of People’s Postcode Lottery, our team has been keeping watch on the nest around the clock since the end of March.

“We had hoped to see this chick hatch yesterday, which marked 50 years to the day since Loch of the Lowes became a reserve, but nature always has other plans.

“It’s an absolute delight to see all three chicks hatch successfully. We’re now looking forward to seeing them develop over the summer.”

The trust’s Osprey Protection Programme is supported by players of the People’s Postcode Lottery.

Ospreys were extinct in Britain for much of the 20th century.

The Scottish Wildlife Trust said this recovery is due to the efforts of conservation charities.