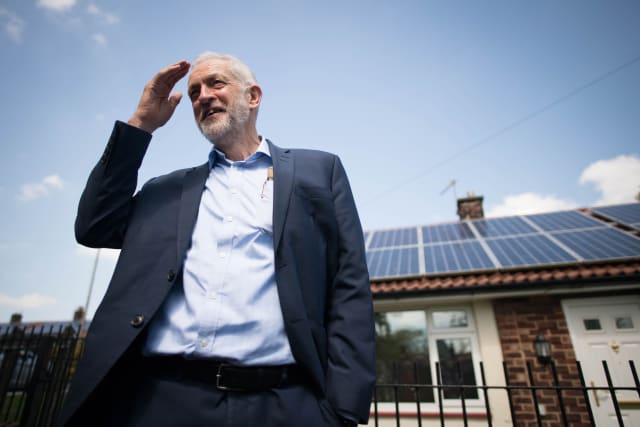 Labour leader Jeremy Corbyn has said the party’s plans to tackle climate change are “crucial” as he visited a Greater Manchester housing estate to launch his “green industrial revolution”.

Mr Corbyn set out plans to tackle the “climate emergency” as he viewed solar panels installed on social housing in Walkden, Salford.

Interest-free loans, grants and changes to regulations will help an additional 750,000 properties install solar panels under the Labour plan.

The Labour leader said: “We are announcing here a policy which is a response to the climate emergency that we got declared in Parliament, that we are going to ensure that 1.75 million homes get solar panels and that the community benefits from that in lower heating bills for people in homes, lower electricity prices for them and also that we are going to take the National Grid into public ownership.”

He said National Grid profits of £3 billion in the last year would be “much better spent” investing in renewable energy.

“It’s a win-win situation and it’s crucial we as a country do it,” he said.

“If we don’t reduce the amount of carbon we are putting out, and obviously every other country in the world, then the climate emergency doesn’t stay normal, it gets worse.”

Speaking before his visit to Greater Manchester, he said: “Too many think of green measures as just another way for companies or the government to get money out of them, while the rich fly about in private jets and heat their empty mansions.

“Labour’s approach is different. Our green industrial revolution will benefit working class people with cheaper energy bills, more rewarding, well-paid jobs, and new industries to revive the parts of our country that have been held back for far too long.”

Mr Corbyn was joined by shadow business secretary Rebecca Long Bailey to speak to Mark Lowe, from housing association ForHousing, and deputy mayor of Salford Paula Boshell about the work done on bungalows on Mereside Grove and homes in the surrounding area.

Ms Long Bailey said the plans would be the equivalent of taking four million cars off the roads.

She said: “It will benefit consumers because where the solar panels are installed, that will take money off their electricity bill and any money that they potentially gain through that, particularly with the people who install solar panels who aren’t in social housing, they’ll be able to take the economic benefits of any electricity they export into the grid.”

Ms Long Bailey said solar panels on social housing would also generate electricity to go into the grid but money from that would go to local authorities, creating an estimated £66 million.

Labour claimed that installing solar panels on social and low-income homes could save bill payers an average of £117 a year, which could rise to £270 for retired households.

The party estimates its policy will create 16,900 jobs and save 7.1 million tonnes of CO2.

Solar Trade Association director of advocacy and new markets Leonie Greene said: “A solar homes push would give a tremendous boost to green jobs across the UK, which are good quality and local in nature.

“We are particularly pleased to see Labour’s focus on social housing, since solar can save households potentially hundreds of pounds off their energy bills.

“Current policies deter those who need solar the most from accessing it, which is a great shame.”