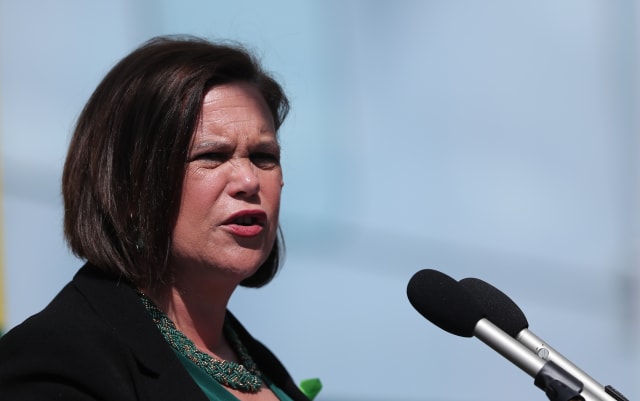 Sinn Fein’s leader says the Prime Minister has given no guarantees that she would be willing to legislate for Northern Ireland on rights issues.

While talks to restore the Stormont Executive continue, Sinn Fein’s position has been that if negotiations fail, the British Government should step in to resolve outstanding rights issues, including marriage equality and an Irish Language Act.

Sinn Fein’s senior talks negotiator Conor Murphy has previously said the British Government gave an assurance that same-sex marriage would be passed at Westminster if the Assembly failed to pass legislation on the issue.

On Thursday, party leader Mary Lou McDonald said she has been given no such guarantees from Theresa May since the new round of talks began.

“Thus far, Theresa May has been most ineffective in creating the right climate for agreement,” she told the Press Association.

“Unfortunately, her confidence and supply relationship with the DUP has clouded her judgment, and that kind of positive dynamic that should be coming from the head of government in London is absent.

“We’ve been absolutely clear with both governments and the other parties that we’re not interested in an endless circular talks process.

“If that can’t happen – and I want it to happen, but if it can’t – then the two governments can’t just stand back and point fingers.

“If we don’t have partners in unionism, then our strong view is that the governments will have to step in.”

The Sinn Fein leader confirmed that all the “outstanding rights issues” are as important as each other, as after 10 years in the Northern Ireland Executive, both marriage equality and an Irish Language Act were blocked and frustrated and she is not confident that they would be resolved in a restored Assembly.

One tabled idea is the removal of the Petition of Concern, which was used by the DUP and other parties to block marriage equality votes in Stormont.

Sinn Fein have also used the voting mechanism to block votes on contentious issues while in government.

Ms McDonald says she believes that removing the POC would be “dangerous”, but admits it has been abused.

“I think we need to tread very carefully with tinkering with the infrastructure with the Good Friday Agreement,” she said.

“The outstanding issues are things we should all be able to rise to without undermining legitimate protections.

“There’s a tipping point in political life, where frankly you run out of road,” she added.

Ms McDonald added she is concerned that there has not been concrete guarantees from all parties that they would sit in a new Executive.

“Everyone calling for the re-institution of government need to make it clear that they are willing to sit in that government,” she said.

“I think it would be really, really helpful for them to confirm that that is the case.

“For Colum Eastwood (SDLP leader) and Robin Swann (UUP leader) to show that they’re not just calling for government, but that they’re willing to sit in government and serve all of the people.”

The Stormont Executive collapsed in January 2017 amid a row about the botched RHI heating scheme.

While awaiting the findings of the public inquiry later this year, Ms McDonald said that any public representative facing evidence that they knowingly participated in the misuse of the scheme would have to step aside.

“Don’t make any mistake about it, the issues that arose there, not just around the misuse of public money, but also any suggestion of malpractice or negligence or corruption, was serious then, and serious now,” she said.

“In terms of political accountability, if there are findings against any person, well, then that person has to act honourably.”

At the time when the botched scheme first became apparent, Martin McGuinness, then deputy first minister, had asked Arlene Foster to step aside from her post until investigations into the issue had been completed.

When Mrs Foster refused, Mr McGuinness walked away from government.

“It would be very very difficult for any person in political life, if there was a concrete finding against them, for them not to respond in a way that’s leaderly and honourable,” Mrs McDonald said.