Pullman: Knighthood marks importance of literature to the nation 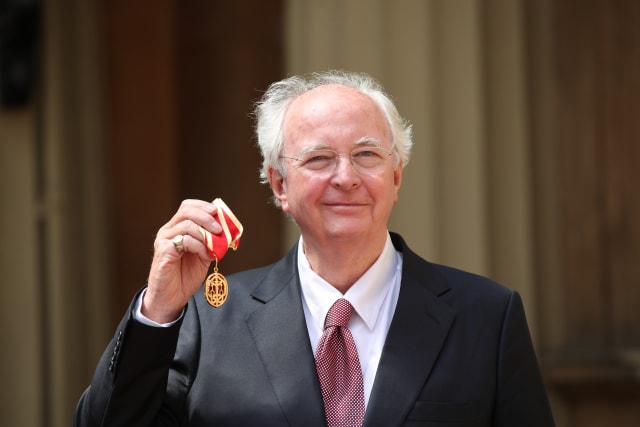 Author Sir Philip Pullman has suggested his knighthood is recognition not just of his own work but of the importance of literature to the nation.

The best-selling writer, known for the His Dark Materials series of books, was knighted by the Prince of Wales during a Buckingham Palace investiture ceremony.

Sir Philip said after receiving the honour: “I think what it means most is that it’s very good to see literature, the arts, the book world, recognised in a nation’s honours list – it’s one of the things a nation should be pleased about, proud of.

“We’re used to seeing sports people and business people and singers and what have you honoured, but I think authors should be represented as well, that’s why I was happy to say yes to this when it was offered.”

A film adaption of the trilogy’s first instalment, starring Nicole Kidman and Daniel Craig, was released in 2007 under its US title, The Golden Compass.

His Dark Materials won awards including the 1995 Carnegie Medal, for Northern Lights, and the 2001 Whitbread Book of the Year prize, for The Amber Spyglass.

Speaking after the ceremony, where tennis ace Sir Andy Murray was also knighted, Sir Philip said: “I’m glad to be in the same bracket as other people I admire who’ve been awarded this honour. It’s nice to be up there with Andy Murray, Chris Hoy and people like that, as well as the many musicians who’ve been honoured.”

The author, who published his first book, The Haunted Storm, in 1972, remains a prolific writer and in May last year was named author of the year at the British Book Awards, the latest prize in a storied career.

Born in Norwich to an RAF pilot, Sir Philip moved often during his early childhood whenever his father was redeployed.

After his father died in 1954 when Pullman was seven, his mother remarried and moved to Australia, before the family eventually settled in North Wales.

The writer attended Exeter College, Oxford, to read English, later joking: “Though I never learned to read it very well.”

He began teaching at the age of 25 and published his first children’s book, Count Karlstein, in 1982 before going on to greater success.

Asked about the appeal of his books he said: “I think I’m telling a story, everybody loves a story. It doesn’t matter if you’re jaded or sophisticated – everybody wants to know what happens next.”

Charles appears to be a fan of the author’s most famous work as he has read the His Dark Materials set.

Sir Philip said: “I know he’s read the trilogy, he sent me a letter afterwards.”

In 2017 Sir Philip returned to the Dark Materials universe to launch a new trilogy. The first part, The Book Of Dust, won critical acclaim, and the second, The Secret Commonwealth, is due to be published in the autumn.