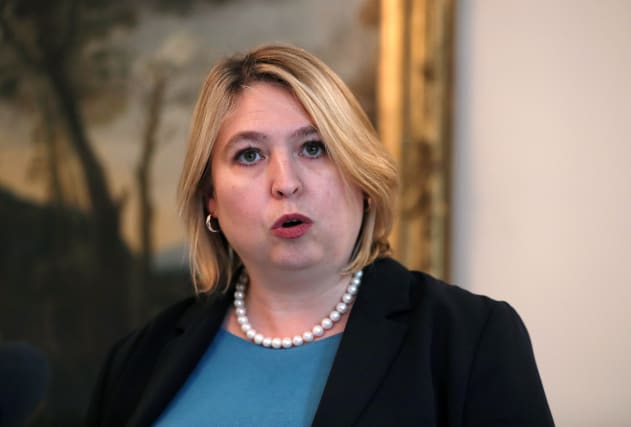 The leaders of Northern Ireland’s parties have united to demand that Karen Bradley moves to release compensation for abuse victims.

In a joint letter, six party leaders have asked the Secretary of State to bring forward legislation to compensate survivors of historic institutional abuse.

It is signed by DUP leader Arlene Foster, Sinn Fein’s Northern Ireland leader Michelle O’Neill, as well as those of the UUP, SDLP, Alliance and Greens.

Earlier Mrs Bradley pledged to legislate to compensate the victims but only once fundamental questions about the redress scheme are answered.

Facing calls to resign by abuse survivors, the Northern Ireland Secretary moved to explain her decision to defer enacting the scheme at Westminster and instead add the issue to the agenda of Stormont’s powersharing talks.

Compensation payments recommended by a Stormont-commissioned inquiry have been on ice for two-and-a-half years due to the collapse of the devolved institutions and Mrs Bradley has been under mounting pressure to sanction the outstanding payments.

The Conservative MP said a public consultation on draft legislation had identified a series of key issues that needed to be hammered out before she could proceed with tabling a final Bill.

Mrs Bradley said she had asked the Stormont parties to examine the questions as part of the talks process because that would be the quickest way to resolve them.

“We cannot go forward until we have answered those questions,” she said.

“I want to get on with this with the utmost urgency but those questions need answering and part of that is the political parties in Northern Ireland helping to answer those questions.”

Pressed on the issue during a visit to the annual Balmoral agricultural show near Lisburn, Mrs Bradley added: “You need to understand that to get legislation through Westminster, which I am prepared to do, these questions will need to be answered before that can happen.”

However in a joint letter, party leaders have demanded she acts without any further delay.

“The parties share the view that despite ongoing talks aimed at restoring the Assembly that the recommendations of the Hart Inquiry should be addressed without any further delay and a suitable legal and financial framework put in place to begin addressing the needs of victims by you as Secretary of State,” the joint letter states.

“We look forward to your response shortly.”

Dozens of victims have died without receiving compensation that was recommended by the wide-ranging inquiry that reported just before devolution imploded in January 2017.

A redress scheme, in which victims would have been paid between £7,500 and £100,000, was one of the recommendations of the Historical Institutional Abuse Inquiry (HIAI).

“I have asked him would he work with my officials also, so we can deliver,” she said.

Mrs Bradley said the consultation, overseen by the head of the Northern Ireland Civil Service, David Sterling, had raised questions about the “remit, role and responsibilities” of the redress board that will administer the compensation.

She said if those issues are not resolved victims may face an even longer wait for compensation.

“I want them to have the redress they rightly deserve but I cannot do that until these fundamental questions are resolved because we need to get this right,” she said.

It is understood politicians will be asked to examine issues around the total compensation bill, what amount religious orders should contribute, and how the redress board will assess the level of recompense due to individual victims.

Government officials are understood to be concerned that if the legislation is tabled without those issues resolved it could be fundamentally altered by amendments in the Commons and Lords.

Facing media questions at the showgrounds, the Northern Ireland Secretary rejected claims from victims that she was using them as a “political football” to try to force the Stormont parties into a deal to restore powersharing.

“I am determined to deliver for those victims,” she said.

Mrs Bradley suggested the fate of the redress scheme did not rest on the outcome of the overall talks process.

“To be absolutely clear, this is not part of a talks process, this is a piece of work so we can answer the fundamental questions and get on and deliver for those people that I desperately want to deliver for,” she said.

Mrs Bradley insisted she was prepared to move the legislation at Westminster.

“I have asked the political parties if they can work on that, I have asked Sir Anthony Hart if he can work with my officials on that.

“We need to find a way to answer those questions and that is what I am determined to do as quickly as possible.”

“It’s past time that victims were actually treated with respect, and with some level of sensitivity, and these cases are time sensitive because many people might have health challenges, some are advanced in years, and it’s nothing short of cruel to leave them hanging on in that way.

“That is on Karen Bradley, that is on the British Government and shame on them for allowing this situation to transpire.”