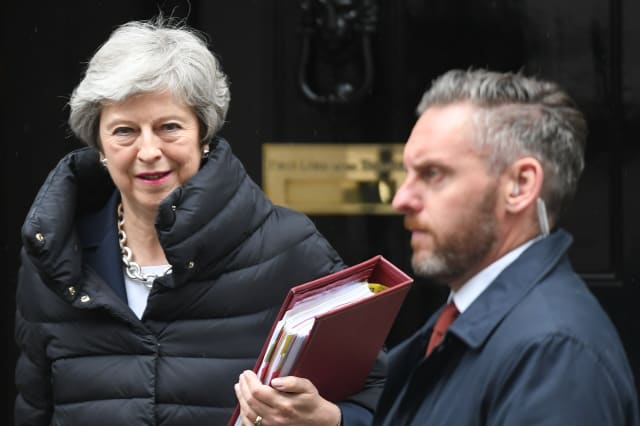 Theresa May has fended off calls for her immediate departure from No 10 – but only after agreeing to set a timetable for the election of her successor.

The Prime Minister will meet the chairman of the Tory backbench 1922 Committee Sir Graham Brady at the start of June to agree the details of the leadership contest.

The move follows a lengthy meeting between Mrs May and the 18-strong 1922 executive during which she again came under pressure to name her exit date from Downing Street.

Even as the talks were taking place in Westminster, Boris Johnson galvanised the race to succeed her, confirming he would be a candidate.

Following 1922 executive’s 90-minute meeting with Mrs May, Sir Graham said he would meet her again after the Withdrawal Agreement Bill (WAB) – needed to ratify her Brexit deal with Brussels – has received a second reading in the Commons in the week beginning June 3.

He said the meeting would take place regardless of the outcome of the vote.

“We have agreed to meet to decide the timetable for the election of a new leader of the Conservative Party as soon as the second reading has occurred and that will take place regardless of what the vote is on the second reading – whether it passes or whether it fails,” Sir Graham told reporters.

He added: “It was a very frank discussion, I tried to make sure that all the views represented on the executive were expressed and we had a very frank exchange with the Prime Minister.”

A No 10 source acknowledged that if the Bill was defeated, the pressure for Mrs May to go immediately will inevitably ratchet up.

“She would have to say ‘This is how I envisage the timetable for a leadership election happening and there would have to be some sort of agreement about that’,” the source said.

The meeting took place amid a growing clamour from Tory backbenchers for the Prime Minister to set a date for her departure.

Many Conservative MPs blamed frustration among voters at her failure to take Britain out of the EU as planned on March 29 for the heavy losses the party suffered in the English council elections.

They fear the party is heading for another drubbing at the hands of Nigel Farage’s Brexit Party in the European elections on May 23.

Mrs May’s decision to bring forward the WAB at the start of June was seen as a last throw of the dice to get her deal through Parliament – following three earlier Commons defeats – and to take Britain out of the EU before her time in office is finally up.

The Prime Minister has said it is “imperative” the Government gets the legislation onto the statute book by the time MPs break for their summer recess – expected in late July.

However, while talks with Labour on a possible compromise agreement are continuing, it remains far from clear that she has the parliamentary numbers to get it through.

One possible hope for Mrs May would be if Labour ordered its MPs to abstain rather than vote against it.

However, the party leadership appears to be split on what course to take.

On Wednesday, shadow foreign secretary Emily Thornberry said they would oppose the Bill.

However on Thursday, Jeremy Corbyn stopped short of saying they would vote against, saying only they “won’t support it” unless it met their demands.

“We’ve put to the Government a very strong position that we want a customs union with the European Union to protect jobs and trade, as well as trade access, and we want to protect the rights at work, consumer rights and environmental rights,” he said.

“Our view is there has to be a relationship with Europe which guarantees those things and if that Bill doesn’t do it then we won’t support it.”