A deer spotted in central Manchester startled locals after it swam and galloped through parts of the city.

Sightings were reported from around noon as the deer was spotted in a canal swimming past the Well Pharmacy offices in Castlefield, as well as running down Oxford Road.

Kate Erskine, from Manchester, told the Press Association: "The deer swam past the Well Pharmacy offices in Castlefield and got to a dead end.

"People were trying to help but there wasn't much that could be done. It got to a shallow point in the canal and managed to jump out, before running towards Deansgate, which was worrying.

"Both the RSPCA and police were made aware." 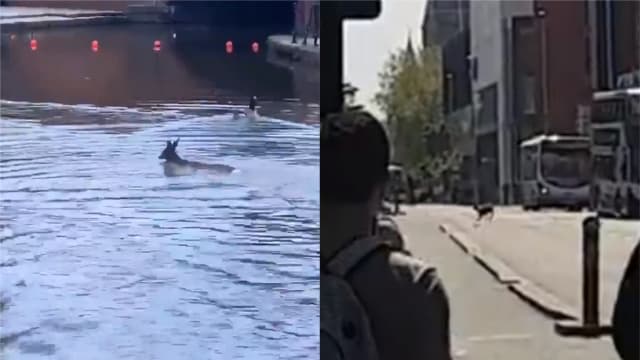 Later on Wednesday afternoon the Greater Manchester Police city centre Twitter account shared a photo of the deer heading into Whitworth Park, accompanied by the caption: "Currently a deer in the City Centre first seen near the canal in Castlefield.

"CCTV asked for a description of the animal 'erm, it's brown & a deer' replied the officer. Last seen in this photo taken by a PCSO heading into Whitworth Park. No i-deer where it is heading next."

An RSPCA spokesperson told the BBC: "We received a report from the police that a medium-sized female deer was in the canal in Manchester city centre this afternoon but it managed to get out.

"We were then told the deer was stranded on some land near the canal but it again managed to get free and ran away before our officers could attend."