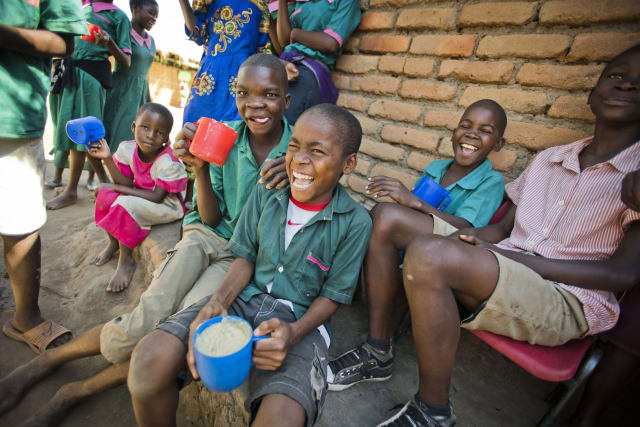 A school feeding charity will reach 95,000 more chronically hungry children in Zambia after a fund-raising campaign raised millions of pounds.

The Mary’s Meals Double the Love campaign raised £3.5 million in donations, which has been boosted to £5.5 million by the UK Government.

The funds will provide one good meal every day in school for children in Zambia which suffers from high rates of malnutrition, poverty and food insecurity.

Mary’s Meals said that more than 360,000 primary school-age children are out of school, while those who do attend are often so hungry they don’t have the energy to concentrate and learn in class.

Though the match-funding cap for the campaign was £2 million, which was matched by the UK Government, supporters actually donated £3.5 million taking the total to £5.5 million.

Daniel Adams, Executive Director of Mary’s Meals UK., said: “The generosity of our supporters across the UK, who have responded overwhelmingly to this match funding campaign, will help us to transform the lives of many, many more hungry children with the gifts of food and education.

“Double The Love was marked by a huge outpouring of love and generosity from our supporters. Their unwavering commitment to our mission gives us a wonderful opportunity to create an even bigger impact in Zambia where children who will receive Mary’s Meals can grow up – better nourished and better educated – to become the men and women who will lift their communities out of poverty and end their reliance on aid.

“The fact the remarkable kindness of our supporters can unlock additional funding from the UK Government, through the UK Aid Match initiative, to reach more hungry children is a huge boost.”

International Development Secretary Rory Stewart announced the £2 million in UK Government match funding during his first visit to Scotland on Thursday in his new role, where he met with Mr Adams.

Mr Stewart said: “I am delighted the UK Government has matched the first £2 million to Mary’s Meals’ Double the Love campaign, helping them to raise a total of £5.5 million. This will pay for school meals in Zambia, giving its children a chance of a decent education.

“I hope the success of this Argyll-based charity encourages other Scottish organisations to apply for UK Government funding through schemes like UK Aid Match and the Small Charities Challenge Fund.

“Their work is making a significant and lasting difference.”

Worldwide, Mary’s Meals is providing 1.4 million children with a nutritious meal every school day across 18 countries.

Eight-year-old Tasila, who is in grade two in Msoro, Zambia, said eating Mary’s Meals each school day gives her the energy to play and learn.

She said: “Phala [vitamin-enriched maize porridge] makes me feel good, it takes away my hunger.

“It gives me energy to run, and to listen to the teacher and answer their questions in class.”