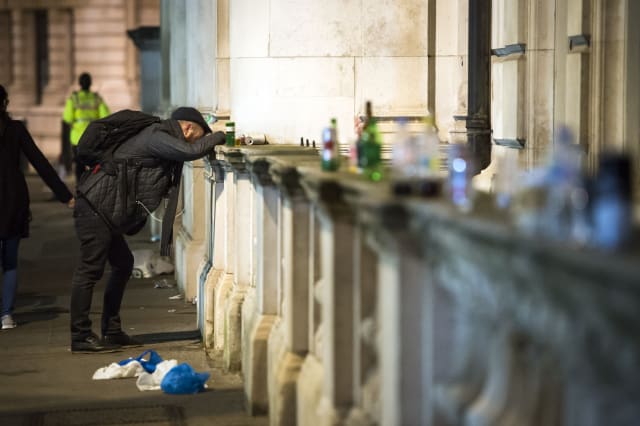 Drinkers in the UK get drunk more often than anywhere else in the world, findings from a global survey suggests.

Britons reported getting drunk an average of 51.1 times in a 12-month period – almost once a week, the 2019 report featuring 36 countries found.

Researchers believe it may be time to introduce guidelines on how to get drunk safely, which would reach binge drinkers who may currently see upper limits as “irrelevant”.

The study comes amid an overall downward trend of drinking levels in the UK, with abstention on the rise, particularly amongst young adults.

Professor Adam Winstock, founder of the Global Drug Survey, said while fewer people were drinking, many who were are doing so in a potentially harmful way.

Researchers based in London surveyed 5,400 people from England, Scotland, Wales and Northern Ireland and more than 120,000 globally between October 29 and December 30 last year.

The report, the eighth to be published, will be launched on Wednesday evening by the independent research group who say it is the largest drug survey in the world.

English speaking countries led the way for how often their citizens get drunk, with the USA, Canada and Australia closely following the UK at the top of the global rankings.

Prof Winstock said: “We get told too much is bad, and it is, but current guidelines fail to accept the pleasure of intoxication and give little guide on difference between being a little drunk and a lot drunk, and doing it 3-4 times a year versus weekly. We need to have that conversation.

“In the UK we don’t tend to do moderation, we end up getting drunk as the point of the evening.

“Until culture changes and we become more European and moderate in our drinking, we might have to bite the bullet and think about how to advise people to get drunk drinking less.

“Getting drunk carries risks of injury and health harm, but we need to start highlighting the risks at different levels of drinking even if they are above safe limits.”

Current NHS guidelines say there is no “safe” level of drinking and that men and women should not drink more than 14 units of alcohol a week on a regular basis – around six pints of beer.

It is understood officials are not looking into amending advice at this stage.

The survey found the UK is second behind Australia in how many people sought emergency treatment following alcohol use in the last 12 months – 3.7% of respondents.

UK drinkers regretted just under a fifth (18.5%) of their drinking sessions, compared to 20% globally.

Women consistently reported feeling post-drinking regret more often than men, while German speaking women over the age of 25 were most likely to be concerned about their sessions.

But the data showed that in general people “overwhelmingly like getting drunk”, the report said.

Speculating over Brexit, the report said: “Changing the cultural narrative concerning intoxication and promoting moderation seems to be good for a nation’s health.

“The EU may see the UK leaving the EU as positive in terms of reducing the contagion of ‘le binge’ which may have been one of the UK’s less popular exports.”

The report also compared the value for money aspect of drugs bought in the UK.

Despite alcohol being the most popular drug, shop-bought drinks were seen as less value for money than LSD, magic mushrooms, MDMA, ketamine, cannabis and GHB.

Drinks bought in a bar were perceived as the worst value for money intoxicant, having overtaken cocaine – which came bottom in 2016.

The Alcohol Information Partnership, which is funded by the drinks industry, questioned the survey findings.

A spokesman said: “This report runs contrary to the vast weight of the data.

“Major reports by globally-respected organisations such as the World Health Organisation and the ONS have consistently shown that drinking in the UK has been falling for more than a decade and Brits are actually drinking less than many of our European neighbours.

“The industry remains committed to tackling harmful drinking and the evidence shows that the way people drink in the UK is changing with people increasingly choosing fewer, better quality drinks which is a positive move in the right direction.”