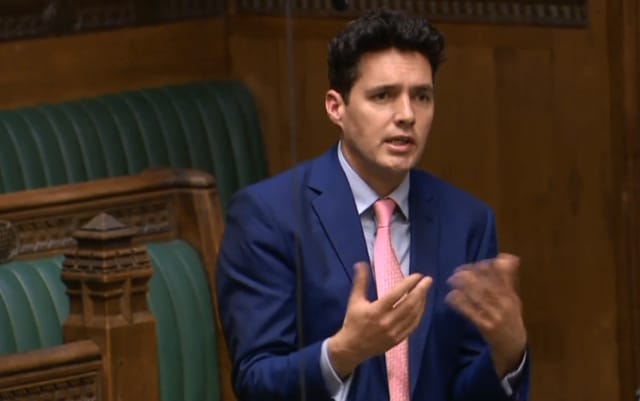 An MP has blasted his colleagues for “not taking seriously” the issue of violent crime after only a handful turned up for a debate on the issue.

Conservative Huw Merriman (Bexhill and Battle) said it “was not a very good look” for the Commons to have so few in the chamber to discuss the rise in serious crime when for Brexit “these benches are packed”.

The MP, who is also a Treasury aide to Chancellor Philip Hammond, said: “We talk about Brexit far too often in this place and when we do these benches are packed. And yet look at it here, there’s hardly anybody at all.

“These issues cost lives, ruin lives for families and the fact that MPs are, in my view, not taking it seriously enough to be here to speak up for their communities, I’m afraid is not a very good look on this House.”

He later suggested to Home Office minister Victoria Atkins: “Will you consider whether every single MP could partner up with a youth centre in and around London so we could work closely with them, they can work closely with us, and that may bring more people into this sphere?”

Ms Atkins replied: “I think that is a really great idea.”

Mr Merriman was speaking after Home Secretary Sajid Javid insisted his “eyes are open” to the scale of the challenge facing the country from serious violence.

Opening a general debate in the Commons on serious violence, Mr Javid told MPs that with its serious violence strategy, the Government is “fighting on all fronts with all partners to try and stop this senseless violence”.

But Labour claimed the Government’s austerity policies are contributing “to the increased causes of crime in just about every conceivable way”.

Mr Javid said: “My eyes are open to the scale of this challenge. Last year we saw the highest number of knife murders since records began. Already this year we have seen 30 fatal stabbings on the streets of London alone.

“There are stark figures, yes of course, but to truly understand what they mean we must look beyond the statistics to the lives that they represent.”

He said they were “fighting on all fronts with all partners to try and stop this senseless violence”, citing the new Offensive Weapons Bill, expected to gain Royal Assent on Thursday, as part of that.

The Cabinet minister finished by saying: “As Home Secretary it is my duty to keep our streets safe, serious violence is a threat that I refuse to ignore.”

In response, Labour’s shadow home secretary Diane Abbott said she had to start by “talking about the effect of the Government’s policies in the round”.

She said: “Because violent crime doesn’t happen in a policy vacuum, and we would contend on this side of the House that the Government’s austerity policy has contributed to the increased causes of crime in just about every conceivable way.

“That is one of the reasons why the Government has presided over a rise in violent crime.”

Ms Abbott said figures from the National Audit Office show central government spending on the police “has been cut in real terms since 2010”, and called the most recent funding settlement a “sticking plaster on a gaping wound”.

Labour chairwoman of the Home Affairs committee Yvette Cooper said undoubtedly there was an issue about whether the resources going in to tackling serious violence match the “scale and urgency” of the problem being faced.

She said: “In order for those organisations working together to have an impact, there also needs to be strong enough leadership from the Government and from the Home Office.”

And her Labour colleague Vernon Coaker (Gedling) said there needed to be “more urgency” from Mr Javid and his colleagues, saying that the National Crime Agency had identified 2,000 county lines across the country, involving 10,000 children.

He said if thee were a terrorist attack “quite rightly the resources of the nation” would be focused on it and “ministers would be queuing up” to lay out how we were going to defend our communities.

“But where’s the same passion and the same urgency form the Government when so many young people and others have been stabbed or shot to death or affected by violent crime?” he asked.

“Where is that passion, that desire to do something abut it?”

Tory Jeremy Lefroy (Stafford) said the debate was “overdue” and it needed to be discussed more often, adding: “If we don’t we are failing our constituents, we’re failing particularly our young people in a matter which gives them heartache and heartbreak every day, week and month in our communities across the country.”