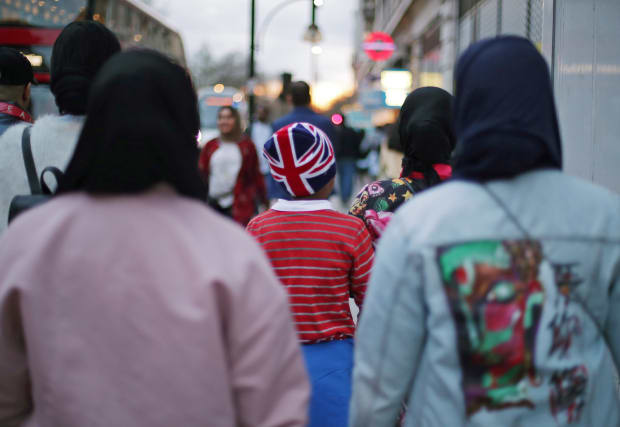 A row has erupted after police chiefs warned a new definition of Islamophobia could undermine the fight against terrorism.

Two of the UK’s most senior police officers said the terms put forward by a group of MPs could allow suspects to challenge investigations on the grounds they were Islamophobic.

But Baroness Warsi, treasurer of the All-Party Parliamentary Group (APPG) on British Muslims that came up with the definition, called the claim “extraordinary and disturbing”.

The definition is: “Islamophobia is rooted in racism and is a type of racism that targets expressions of Muslimness or perceived Muslimness.”

Head of UK counter-terrorism policing Neil Basu said the wording was “simply too broad to be effective”.

He said: “It risks creating confusion, representing what some might see as legitimate criticism of the tenets of Islam – a religion – as a racist hate crime, which cannot be right for a liberal democracy in which free speech is also a core value.

“Free speech cannot be an absolute right or freedom to harm, but as it stands this definition risks shutting down debate about any interpretation of the tenets of Islam which are at odds with our laws and customs, which in turn would place our police officers and members of the judicial system in an untenable position.

“Despite the fact it would be non-legally binding, it would potentially allow those investigated by police and the security services for promoting extremism, hate and terrorism to legally challenge any investigation and potentially undermine many elements of counter terrorism powers and policies on the basis that they are ‘Islamophobic’. That cannot be allowed to happen.”

A member of the National Police Chiefs’ Council (NPCC) gave evidence to the APPG but was not consulted on the final wording, he said.

NPCC chairman Martin Hewitt expressed similar concerns in a letter to the Prime Minister on Friday.

In a statement he said: “We are concerned that the definition is too broad as currently drafted, could cause confusion for officers enforcing it, and could be used to challenge legitimate free speech on the historical or theological actions of Islamic states.

“There is also a risk it could also undermine counter-terrorism powers, which seek to tackle extremism or prevent terrorism.”

The APPG report on its definition said it had been reached after “widespread consultation with academics, lawyers, local and nationally elected officials, Muslim organisations, activists, campaigners and local Muslim communities”.

Baroness Warsi said on Twitter that she had written to Cabinet Secretary Mark Sedwill about Mr Hewitt’s letter being leaked to the Times newspaper because “the issues involve national security”.

The Prime Minister’s official spokesman declined to comment on the letter but said: “Any hatred directed against British Muslims and others because of their faith or heritage is completely unacceptable.

“We are conscious that the APPG’s proposed definition has not been broadly accepted, unlike the International Holocaust Remembrance Alliance definition of anti-Semitism before it, which was adopted by the UK Government and other international organisations and governments.

“This is a matter that will need further careful consideration.”

Shadow minister for women and equalities Naz Shah said if the Prime Minister rejects the definition, “the message she sends to the Muslim community will be heard loud and clear”.

She went on: “It has been a great struggle to get the police to record Islamophobia as a specific crime, so it is deeply worrying to see the National Police Chiefs’ Council bringing terrorism into the discussion about tackling Islamophobia.

“This shows a worrying trend of seeing British Muslims through the lens of terror and security, and the Prime Minister must distance herself from this immediately.”