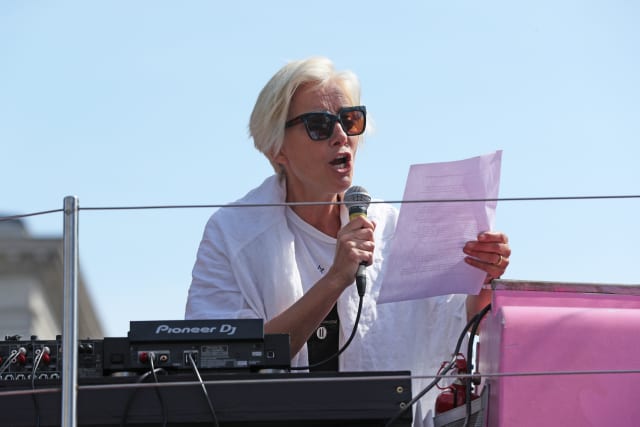 Although not naming the actress directly, peers were left in little doubt who was the target of the veteran politician's jibe.

Lord Blunkett's intervention at Westminster comes after Dame Emma was accused of hypocrisy for flying from Los Angeles to London to join climate change protests.

Responding to criticism of making the 5,400 mile journey to join Extinction Rebellion (XR) demonstrators in the capital, Dame Emma argued it was "very difficult to do my job without occasionally flying".

While urging people to fly less, the 60-year-old, whose credits include Sense And Sensibility and Love Actually, pointed out she was in "the very fortunate position" of being able to offset her carbon footprint.

Lord Blunkett made his criticism during a question in the Lords on plans for a third runway at Heathrow.

The peer, who heads a skills taskforce linked to the airport's expansion plans, said: "Does the minister agree that investing in alternative fuel sources for flights in the future would be more beneficial than people who use airlines regularly preaching to other people that they should stop using them to go on holiday or for commercial purposes – particularly when they have the comfort of flying first class?"

Ducking the controversy, Transport Minister Baroness Vere of Norbiton said: "I will comment on sustainable fuels, which is probably wise in the circumstances.

Emma Thompson
The Prince of Wales tonight paid homage to actress Emma Thompson's bare feet. Calling her his "favourite bare-footed actress", Charles said he got to know them quite well over the years. * The Prince and Thompson were sharing a platform at the 30th anniversary at the charity ActionAid at St James's Palace. Ms Thompson, a celebrity ambassador for ActionAid, stood bare-footed at a lectern making a passionate speech about the charity, which works with impoverished children in more than 30 Third World countries.
Clive James and Emma Thompson help launch BBC1's £62 million line up of programmes.
Victoria Wood (left), who won the BBC TV Personality of 1987 at the Variety Club annual awards ceremony, with Emma Thompson, who won Most Promising Artiste.
Actress Emma Thompson with her Bafta Award for Best Actress for her role in "Howards End" at the awards ceremony.
Members of the cast from a charity production of John Osbourne's play Look Back In Anger, line up in London. (Back row, l-r) Kenneth Branagh, Edward Jewesbury and Gerard Horan. (Front row, l-r) Emma Thompson, Dame Judi Dench, who is to direct the play, and Siobhan Redmond. The production takes place at the London Coliseum for one gala performance in aid of the environmental group, Friends of the Earth.
British actress Emma Thompson in her role in Sense and Sensibilty, which has gained her a nomination for the Best Actress award in the Oscars. See PA Story SHOWBIZ Oscars.
Prince Charles (r) talks with actor-director Kenneth Branagh and his actress wife Emma Thompson at the Royal World Charity premiere of Branagh's film version of Henry V at the Odeon Leicester Square, London. Branagh starred in the title role and his wife played Princess Katherine.
Oscar-winning actress Emma Thompson (right) and her mother Phyllida Law, with Alan Rickman at tonight's (Thursday) preview screening of his directorial debut, 'The Winter Guest', in which the pair star as mother and daughter. The film, written by Scottish author Sharman Macdonald, is based on the experiences of Scots-born actress Lindsay Duncan. See PA story SHOWBIZ Emma. Photo by Sean Dempsey/PA
John Travolta and Emma Thompson pose together on the roof of the Palais des Festivals in Cannes, France, before the premiere of their film Primary Colours, which will open the 51st Cannes Film Festival.
PA NEWS 31/7/98 L-R: GREG WISE, STEPHEN FRY AND EMMA THOMPSON ARRIVE AT THE PRINCE OF WALES' GLOUCESTERSHIRE HOME, HIGHGROVE, WHERE HIS SONS, WILLIAM AND HARRY, WERE PUTTING ON A PLAY FOR THEIR FATHER, WHO CELEBRATES HIS 50TH BIRTHDAY LATER IN THE YEAR.
Actress Emma Thompson (L) jokes with Cherie Blair, after attending a luncheon at 10 Downing Street, London, for Queen Rania of Jordan. The Queen was visiting Britain with her husband, King Abdullah, to express their support for the international coalition. * ... against terrorism.
Actress and Action Aid Ambassador Emma Thompson (right) and actress Patsy Palmer (left) join photographer Gideon Mendel during the 'Broken Landscape' private view at the OXO Tower in London. * The exhibition of photographs from photojournalist Gideon Mendel depict the plight of Africa and the AIDS crisis.
Emma Thompson with her award for Best British Actress in a Supporting Role for the film Love, Actually receives a kiss from Bill Nighy, with his award for Best British Actor in a Supporting Role for the same film, at the London Film Critics Circle Awards, held at the Dorchester, Park Lane, central London.
Emma Thompson and Colin Firth.
Oscar winning actors, Emma Thompson and Dustin Hoffman at the Leicester Square, for the UK premiere of Stranger Than Fiction, in which they both star. PRESS ASSOCIATION Photo. Picture date on:Friday October 20 2006. See PA story. Photo credit should read Fiona Hanson/PA
Emma Thompson and her mother Phyllida Law receive honorary degrees at Royal Conservatoire of Scotland in Glasgow.
Emma Thompson and Tom Hanks at the gala screening of Saving Mr Banks, the closing film of the 57th BFI London Film Festival at Odeon Leicester Square, London.
David Tennant, Matt Smith, Emma Thompson, Graham Norton, Robbie Williams, Jimmy Carr and Olly Murs during filming of the Graham Norton show at the London studios.
Arnold Schwarzenegger and Emma Thompson at the Empire Magazine Film Awards held at the Grosvenor Hotel, London.
Emma Thompson at the beginning of The People's Climate March, central London, a march and rally to demand urgent action on climate change.
Up Next

"They are very important; so many people within the aviation sector are making great strides and are doing it as private companies.

"They are not being forced, but are doing it because they know that it is the right thing to do.

"BA is partnering with Velocys to produce sustainable aviation fuel from municipal solid waste – the plant will be in Scunthorpe.

"Virgin is partnering with LanzaTech also to produce sustainable aviation fuel. They have demonstration plants already in the US, Belgium and China."