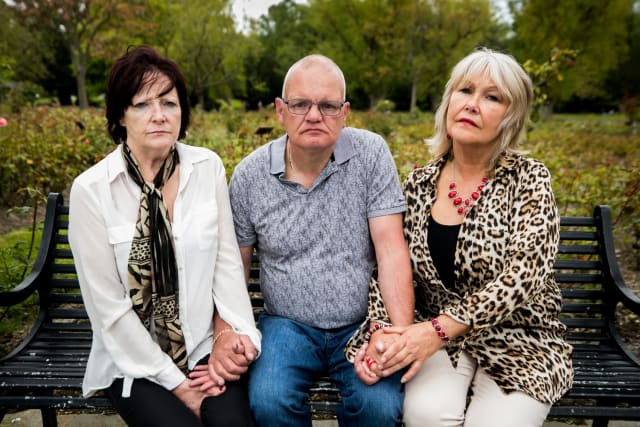 Abuse victims in Northern Ireland have demanded Karen Bradley’s resignation after she again deferred action on a stalled compensation scheme.

Survivors of abusive children’s homes run by the state and religious orders have accused the Northern Ireland Secretary of treating them like a “political football” after she declined calls to sanction the outstanding redress payments.

Mrs Bradley wrote to victims on Tuesday night telling them she had instead decided to add the controversial issue to the agenda of the latest Stormont talks process.

Victims allege they are being used an pawns in a Government bid to blackmail the local parties into striking a deal to restore devolution and release the compensation.

Margaret McGuckin, who survived abuse at a Belfast home run by the Sisters of Nazareth religious order, said she was “heartbroken” at Mrs Bradley’s move.

Ron Graham, who was abused at the notorious Kincora boys home in Belfast, said: “I think the Secretary of State should resign. I don’t think she realises the damage she has done to victims today.”

Mrs Bradley has been under mounting pressure to use her authority to approve redress payouts that have been withheld for two-and-a-half years due to Stormont’s collapse.

Dozens of victims have died without ever receiving compensation that was recommended by a wide ranging state inquiry that reported just before devolution imploded in January 2017.

Northern Ireland civil servants have prepared legislation to enact the redress scheme, but that cannot be progressed without ministerial approval.

Hopes of a breakthrough were raised earlier this month when the head of the civil service David Sterling formally asked Mrs Bradley to enact the scheme at Westminster. Mr Sterling’s request came following a wide ranging public consultation exercise on the proposals.

The Conservative MP has not acted on that advice, instead referring the matter back to Mr Sterling and asking him to add it to the agenda of one of several cross-party working groups set up as part of the latest talks process.

A redress scheme, in which victims would have been paid between £7,500 and £100,000, was one of the recommendations of Historical Institutional Abuse Inquiry (HIAI).

The inquiry ran for two years and saw hundreds of victims come forward to relive horrific experiences of child abuse.

The probe, chaired by retired judge Sir Anthony Hart, reported just days before Stormont collapsed – meaning his recommendations have been on ice ever since.

Kate Walmsley, who was abused in the Nazareth House in Londonderry, said: “I just believe this is mental torture that we are suffering, all the victims are suffering.

“We have come out and told our stories and at the present I just wish I hadn’t done it, because nobody cares.”

Ms Walmsley, Ms McGuckin and Mr Graham are members of the SAVIA lobby group for victims and survivors of abuse.

“We thought, hoping against hope, that she would have learnt her lesson on her past blunders that she has made.

“It such an emotive issue here, she could have maybe made something out of this for herself, for her own self-esteem and respect. But she had failed us now, so it’s time for her to go.

“She’s the only minister capable of passing any legislation. She is in charge of Northern Ireland at the moment as a minister and she has failed us – the most vulnerable people here. These people are broken hearted, just traumatised. So many people have passed away. How many times have we to press upon her the need to deliver for these victims.”

Mr Graham noted the prospect of Mrs Bradley acting to relax licensing laws to enable drink to be served over extend hours at this summer’s Open golf championship at Portrush.

“The golf Open seems to be more important to the Secretary of State to pass legislation for them to open their bars,” he said.

“It’s about time she looked us in the face and tell us why she won’t take it to Westminster.”

He added: “What do we have to do to get the justice, the apology and compensation and the package we were promised?

“Any other part of the UK wouldn’t have this problem. But because we are in Northern Ireland we are being treated like a political football.”

Marty Adams, who suffered abuse in Rathgael Training School in Bangor, threatened to protest at a garden party being attended by Mrs Bradley next week.

Mr Adams, who is a representative of the Survivors Together group, said: “Victims are to consider inviting themselves to the NIO Garden Party in protest of Secretary of States failure to address the issue of redress, we will not and should not be cheer leaders on the side-lines to persuade both main parties (DUP and Sinn Fein) to get back to work.

“We at Survivors Together are calling for the resignation of Karen Bradley with immediate effect. She has not only failed victims but failed this country as a whole in her failure to govern with authority.”

A UK Government spokesperson said: “The Secretary of State is grateful to David Sterling for all his work on this consultation and to everyone who gave evidence.

“There are urgent and important decisions to now be made, such as the total redress amount.

“The Secretary of State believes the quickest and best route to deliver for victims and survivors is to include this issue as a priority in the talks process.

“This has a timeframe to make progress by the end of May.”