Time to give NI’s next generation hope, Sinn Fein chief says ahead of talks 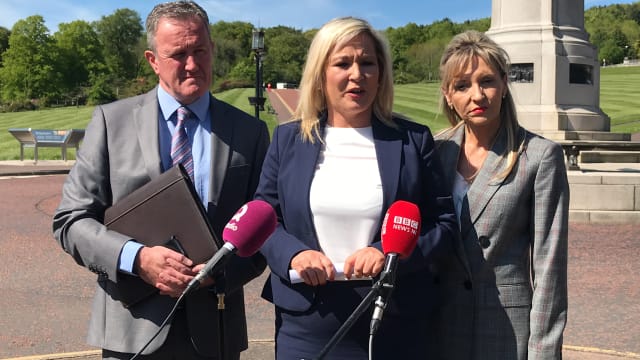 Sinn Fein’s deputy leader has said it is time to give a new generation the hope of 21 years ago when the Good Friday Agreement was signed.

Michelle O’Neill was speaking as she arrived at Stormont House on Tuesday afternoon for the latest stage of talks aimed as restoring devolved government in Northern Ireland.

Ms O’Neill, accompanied by MLA Conor Murphy and her party’s European candidate Martina Anderson, said her party has entered the fresh talks with a “good heart” and with the “intention to find resolution”.

“I do believe it’s now time to give a new generation the hope that we had 21 years ago, the hope of the Good Friday Agreement,” she said.

“The only way we are going to do that as leaders is if we work together, but obviously church leaders and other groups out in society have a role to play in trying to make our society work, so what we do want is engagement and any conversation that helps to make things better, to try and find a way.

“But these are not new issues, we know what the issues are, we know what we need to do, we know what needs to resolved in order to make politics work and we will not be found wanting in terms of playing our part.”

“There was a clear message sent to politicians in the local government elections, that Northern Ireland society as a whole wants the politicians to move on, so I think the message coming today from the church leaders and their support in this round of talks is very welcome,” he said.

“It’s something we should take on board, and also their help and guidance at this time.”

“This could all be solved in the morning if people wanted to,” he said.

“We have already proposed that we suspend the petition of concern, allow for Stormont to be up and running the very next day and for issues like marriage equality to go through the Assembly. That could be done.

“We could then properly reform the petition of concern for the next Assembly term. That’s how we get things up and running.

“We have made that offer, we reiterate it again today and we hope that people take it seriously.

“No-one has outrightly rejected it yet because I think they know we are going to come back to that position.”

The last DUP/Sinn Fein-led powersharing coalition imploded in January 2017 when the late Martin McGuinness quit as Sinn Fein deputy first minister amid a row about a botched green energy scheme.

The fallout over the renewable heat incentive (RHI) was soon overtaken by disputes over the Irish language, the region’s ban on same-sex marriage and the toxic legacy of the Troubles.