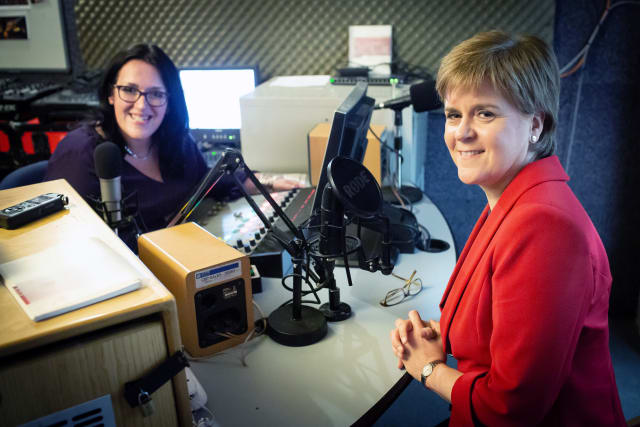 Nicola Sturgeon has said she “absolutely” suffers from “imposter syndrome” in her job as Scottish First Minister.

She also revealed that she speaks to her mother Joan every day and that getting married to her husband, SNP chief executive Peter Murrell, had made her feel “more secure and stable”.

The SNP leader told community radio station Sunny Govan Radio: “Even though I have been in politics for a long time, I have been First Minister for four years, there will be days when I think ‘should I even be here? Is somebody about to find me out?'”

Radio host Anne Hughes had asked Ms Sturgeon, who is Scotland’s first female first minister, if she ever suffered from imposter syndrome.

The SNP leader told her: “Absolutely, I don’t think there is a woman alive, particularly working-class women, who don’t experience that at some point in their lives, and probably quite regularly.

“I just think it is natural. In some ways I think women should work to overcome that, and be encouraged to overcome it, but there is a bit of humility as well that I don’t think we should ever lose completely.

“While sometimes over my career I’ve thought it would be good to be a bit more self-confident and have less of that feeling, I wouldn’t like to lose it completely because I do think it is important you keep yourself grounded.”

She went on to say that earlier in her career she took herself “far too seriously” and had adopted an “adversarial, almost macho approach, because that’s what I thought you had to do”.

The First Minister added: “My advice to anybody in politics or anywhere else, any young woman, is you’ve just got to find a way of being yourself, whatever that is, and not try to be something else, be yourself.”

She spoke about the support she gets from her parents, husband and sister throughout the interview, saying: “Particularly the line of work I am in, politics can be a bit cut-throat, it can be a bit stab-in-the-back sometimes, so you really need the people you know you can rely on, and I’m lucky to have some brilliant people.”

Ms Sturgeon told how she still gets nervous “every single time” before giving a speech, as she told how standing for election was “risking mass public rejection and you feel very vulnerable every time you do that”.

She added: “Every time I stand up in Parliament or do a television interview or television debate I fell vulnerable, because just in the blink of an eye I could just crash and burn.”

The First Minister said she “wouldn’t be where I am without my mum and dad and my sister and all the support I have had throughout my entire life”.

She stated: “At the end of the day if I’ve had a really bad day there’s nothing like picking up the phone to my mum, and just hearing that there’s nothing that would make her not be on my side.”

Ms Sturgeon continued: “My  mum insists I phone her every day.

“Sometimes we’re on the phone for 30 seconds, but it has been like this since I went away to university, she always wanted me to phone to make sure I was OK, so now there’s not a day when I don’t talk to her.”

Speaking about her relationship with Mr Murrell, she said she had always thought “marriage doesn’t matter, it’s just a bit of paper”.

She added: “It was a real surprise to me, a really pleasant surprise, how much it did matter when we did it, and how much it made me feel, almost overnight, more secure and stable.

“I don’t think I expected that so that was probably a nice surprise.”