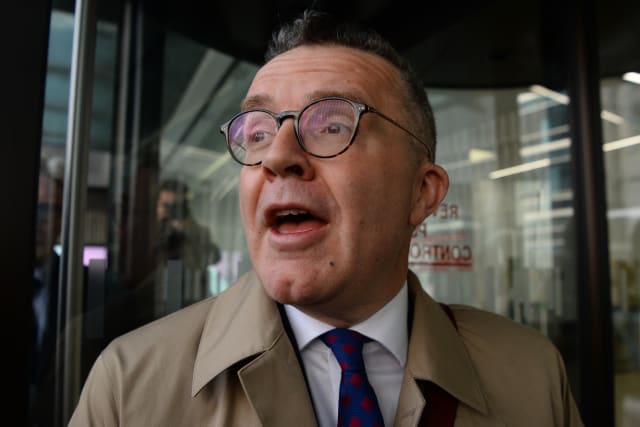 Cross-party talks aimed at striking a Brexit deal were continuing as two senior Labour frontbenchers threw their weight behind calls for a second referendum on any agreement reached.

Shadow Brexit secretary Sir Keir Starmer warned it was “impossible” to see how an agreement between the Conservatives and his party could clear the Commons unless it guaranteed the deal would be put back to the public for a “confirmatory vote”.

And Labour’s deputy leader Tom Watson said he thought the way out of the impasse was a “confirmatory ballot” on Theresa May’s agreement, saying it would be “difficult” for his party to assist in the UK’s exit from the EU without another referendum.

The latest session of talks began on Monday evening, with patience wearing out in the Tory ranks about Mrs May’s leadership and the attempt to strike a deal with Jeremy Corbyn’s party.

Downing Street said the talks, which began in early April, had been “serious” but “difficult”.

Asked if Monday’s meeting between the negotiating teams was the “last chance” to make progress, the Prime Minister’s official spokesman said: “Let’s see how this evening plays out.”

Sir Keir told the Guardian that “probably 120 if not 150” of the party’s 229 MPs could vote against the deal unless it was linked to a second referendum.

And he said: “I’ve made it clear that at this stage, at this 11th hour, any deal that comes through from this Government ought to be subject to the lock of a confirmatory vote.”

Mr Watson told BBC Radio 4’s Today programme: “If a deal could be found that inspires enough votes in Westminster then fine, but it seemed to me that that’s very, very difficult.

“And so my idea of a confirmatory ballot is not a religious point or a point of ideology, it’s just how do you get an outcome, how do you sort this out?

“And one way to do it are these two minority positions – the Prime Minister’s deal and those that think the people should have a say on the deal – plug them together and you build a majority.”

Mr Watson also described Labour’s position in relation to the European elections as a “remain and reform” party.

He was using a speech on Monday to plead with voters to back his party to counter the threat posed by Nigel Farage, who was spending the day campaigning in Labour heartlands.

“There are only two forces that can win this election – that nasty nationalism of the Farage Brexit Party, or the tolerant, compassionate outward looking patriotism of the Labour Party,” Mr Watson will say.

“I can only plead with Labour supporters, don’t stay at home, don’t put that cross elsewhere, don’t let them win.”

Last month Mr Corbyn saw off an attempt to commit the party to a confirmatory referendum on any Brexit deal, and Labour will instead back a fresh vote only if it cannot either win the changes it wants to Mrs May’s deal or secure a general election.

Mr Farage said the idea of a confirmatory referendum was the “most outrageous proposal” he had ever seen and would lead to a party like the Brexit Party winning a majority in Parliament at the next general election.

Speaking during a walkabout in Pontefract, part of Labour MP Yvette Cooper’s constituency, Mr Farage said: “A confirmatory vote, it sounds all nice and fluffy, what does it mean?

“It means we stay in the European Union as we are, or we nominally leave and stay permanently part of a customs union and with single market rules.

“They wouldn’t even give the public the option of actually leaving.

“It’s the most outrageous proposal I’ve ever seen.”

Housing Secretary James Brokenshire said a confirmatory referendum would be “taking us in a different direction, that’s actually saying ‘well, we’re looking at this issue all over again and not giving effect to the original vote”‘.

Foreign Secretary Jeremy Hunt said this week would be “crunch week” for the cross-party negotiations, adding that another public vote “would be a betrayal of what people voted for, and we want to implement the first referendum”.

The Prime Minister’s official spokesman said Mrs May has made clear her views about a second public vote, insisting she was “focused on delivering the result of the first referendum”.

Tuesday’s Cabinet meeting will consider the state of the talks process.

“There will be a substantive Cabinet discussion on wherever we have got to,” a senior Government source said.

If the cross-party approach is abandoned, Mrs May has signalled that a series of votes would be held in the Commons with the aim of finding a Brexit plan that could command a majority, “ideally” with the support of Labour.

A Government source said that ministers had “tried everything else”.

Meanwhile, planning for a no-deal Brexit was continuing in case nothing can be agreed by the October 31 deadline.

But Brexit Secretary Steve Barclay warned Eurosceptics: “If MPs continue to refuse to vote for a deal to leave the EU, we will head towards a showdown in October where we risk losing Brexit altogether,”

He added: “In a choice between a no deal exit or revoking Article 50 I would vote for the former …  yet many MPs would vote to revoke.”