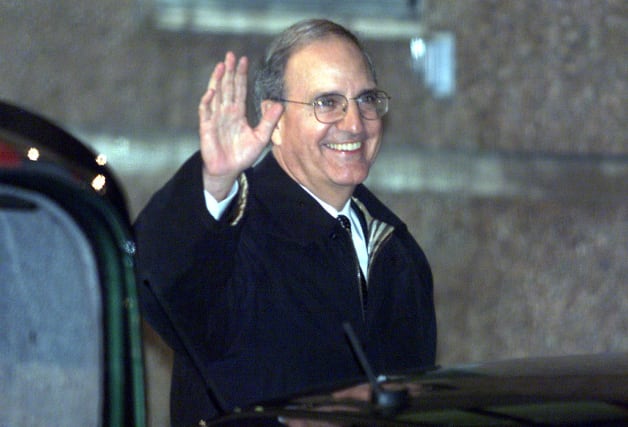 Former US senator George Mitchell has recalled how he thought he was going to Northern Ireland for a few months but stayed for five years.

Speaking to the Press Association ahead of returning to Belfast next week to receive an award for peace building, Mr Mitchell revealed how in 1994 he had promised his wife he was finished with politics.

In 1995, then president Bill Clinton appointed him as the United States special envoy for Northern Ireland.

“I have many memories of it (peace talks), a lot of them were very difficult, it was a hard time for me,” he said.

“I retired from the Senate and I got married at the end of 1994, and I promised my wife that I was finished with politics, and that I was going to take a normal job and be home every night at a normal hour.

“In unexpected and unpredictable ways, I shortly after left for Northern Ireland thinking I was going to be there only for a few months.”

Mr Mitchell first led a review of paramilitary group decommissioning, then chaired the historic peace talks before returning to Northern Ireland in July 1999 to help revive the Assembly.

“So that was a five-year period, and for most of that time there wasn’t much progress and it was difficult to remain optimistic,” he said.

“I was one of a team of three men, former Finland prime minister Harri Holkeri and former Canadian defence minister General John De Chastelain. Both were wonderful companions, great participants and we became lifelong friends.”

Mr Mitchell said the memory he will treasure forever is the signing of the Belfast Agreement on Good Friday 1998.

However, he also expressed gratitude for the opportunity to connect with his Irish heritage.

“My father’s parents were born in Ireland and emigrated to the United States, but my father never knew his parents – his mother died, his father couldn’t care for his children – and he was raised in an orphanage in Boston, and ultimately adopted by an elderly couple in Maine who were not Irish, so I did not have a substantial Irish influence on my upbringing,” he said.

“My mother was an immigrant from Lebanon, she couldn’t read or write English and really had no knowledge of Ireland or the history there.

“I had never been to Northern Ireland, I’d only been to the Republic of Ireland once for a few days on a trip I’d made to Europe while in the Senate.

“So for me, the years I spent there, not just the five years I’ve described, but I was chancellor of Queen’s University for 10 years after that.

“It gave me a sense of my father’s heritage in a way that I never had before, to understand what the life of his parents and grandparents might have been like.

“People always come up to me and thank me, and my answer is, I should be thankful because I gained an awareness of my heritage that I really didn’t have before.”