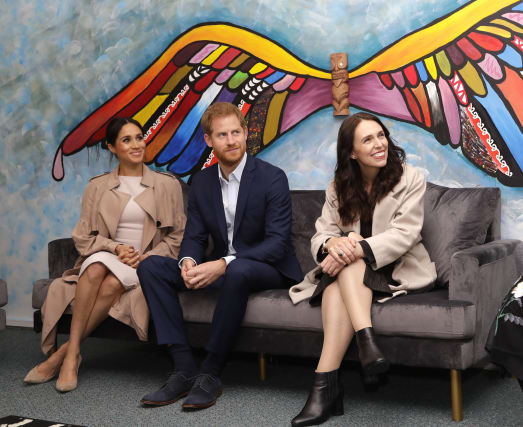 New Zealand's prime minister Jacinda Ardern has congratulated the Duke and Duchess of Sussex on the birth of their son and revealed the country's gifts for the royal baby.

Australian prime minister Scott Morrison also sent his "huge congratulations" to the couple, while opposition leader Bill Shorten also said he was "delighted" by the news.

Meghan's pregnancy was announced as the couple embarked on a tour of Australia and New Zealand last year.

Ms Ardern said New Zealand would make a donation to a group which prepares baby boxes for families in need and the Wellington government will buy native trees to be planted in New Zealand.

"So, they'll be planted here in New Zealand as well. So, I hope New Zealanders think those are nice gifts on their behalf."

Last year Ms Ardern became only the second elected leader in modern history to give birth while in office.

In Australia Mr Morrison, who climbed the Sydney Harbour Bridge with Harry, said it was "great that the wonderful day has come and everybody is well".

"Huge congratulations to Prince Harry and Meghan, the Duchess of Sussex, on the birth of their baby boy today," he wrote on Twitter.

"Becoming a parent is one of the greatest joys of life!"

Meanwhile Mr Shorten said he and his wife Chloe were "delighted for Harry and Meghan on the arrival of their baby boy. They are a lovely couple and will make wonderful parents".

The men are currently on the campaign trail ahead of a federal election later this month.

With the Queen's role as Australia's head of state a continual topic of debate Down Under, the arrival of the seventh in line to the throne was an opportunity for critics to voice their dissatisfaction.

The Australian Republic Movement said it "warmly congratulates Harry and Meghan on the birth of their son, and all Australians who welcomed a child into the world today".

The group said in a statement: "Baby Sussex is the 7th in line for the British throne, behind Prince Harry, Prince Louis, Princess Charlotte, Prince George, Prince William and Prince Charles, making him unlikely to ever rule over Australians.

"We look forward to when our head of state is chosen by Australians, and on merit, instead of birth right.

"An Australian republic will mean that each child born today can grow up aspiring to the top job – regardless of their family, social status or wealth."