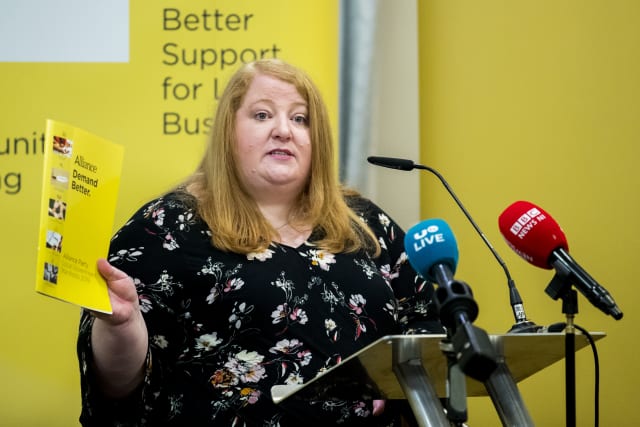 The leader of the Alliance Party in Northern Ireland has hailed her party’s unexpected success at the ballot box as “tremendous”.

After two years at the helm, Naomi Long has increased the party’s representation across Northern Ireland by 65%, bringing the total number of Alliance councillors to 53.

The centrist Alliance Party won seats in 10 out of Northern Ireland’s 11 councils.

The party also made gains west of the Bann, picking up seats in Omagh and Derry.

Ms Long admitted that she did not expect the remarkable breakthrough in the local government elections, adding that it has “transformed” the party.

She said: “We have been fighting for the last two years as we know local government is the base on which we can build for the future in the (Northern Ireland) Assembly.

“I have done a lot of development work since I took over as party leader, particularly in the west, but we couldn’t have predicted that so many of the targets that we set would be realised.

“We got seats in places that our target was to get a candidate who would run there.

“We were not expecting the surge that we got and it has been tremendous. We were fortunate that we have a robust approval system for our candidates.

“It has completely transformed the party and I am excited about where the party can go from here.”

She said the surge in support for the Green Party and People Before Profit sends a message that unionism and nationalism is not people’s priority.

“Nor is this politics of fear of ‘vote for us or you’ll get them’. That has broken,” she added.

“It is saying that there is a progressive movement in Northern Ireland.

“The two main parties (Sinn Fein and DUP) would be very foolish to ignore that message going into the talks.”

Ms Long said she will “quietly celebrate” her party’s success before preparing for the European elections in a few weeks.

After Sinn Fein emerged with the same number of council seats, the party’s John O’Dowd admitted that a number of areas need to be considered after they lost seats in Derry and Omagh.

Speaking to BBC NI’s Sunday Politics programme, he said: “In all it was a solid performance.

“There are areas that we clearly need to look. Derry has taken blows before and we have learned from them and came back, no doubt that will happen again.

“I welcome that there is a broadening of the agenda that is in politics.”

He added that the parties celebrating election victories were around “equality and rights”.

“In a local election people feel freer to go elsewhere and express preferences than they do sometimes in the Westminster election,” he added.

“Overall, particularly in Belfast, it was a good day for us.”

“We always want to do better,” he said.

“We have got major problems in Belfast and we know that.

“People are trying to spin a narrative that we have been absolutely decimated when we have 75 councillors.

“We made net gains in Newry, Mourne and Down and our vote has gone up.”

The SDLP’s Carl Whyte said it was battling former party members who have turned independent.

“In seven out of those eight cases we defeated the candidates and took those seats back,” he added.

“People were predicting our decline and then when the ballots are counted, our vote comes out and our voters are there and they are supporting us.”