May the 4th celebrated by Star Wars fans 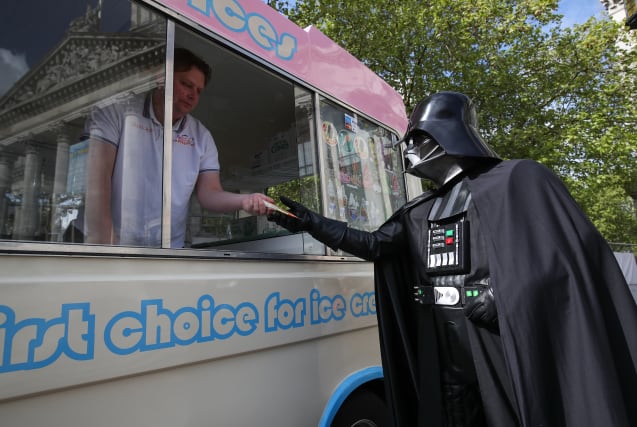 Movie fans across the world have been marking Star Wars Day in style, donning costumes and posting to social media to show their appreciation for the sci-fi franchise.

Star Wars Day is celebrated on May 4 each year, with pun-making fans declaring “May the fourth be with you” in homage to the film series’ classic Jedi phrase.

With Chewbacca actor Peter Mayhew passing away earlier this week, his family used the opportunity to share a special message.

A post on the actor’s Twitter account read: “May the 4th is a tribute to the scale of Star Wars reach and as we process losing Peter we have been reading all of your posts, hearing your stories & seeing decades worth of fan photos and from the bottom of our hearts we wanted to say Thank You.”

While many fans were tweeting, on England’s south coast, cosplay actors at Portsmouth Comic Con took to the streets in their finest outfits, with Mayhew’s own character Chewbacca, Darth Vader and many a stormtrooper on show.

Meanwhile in Ireland, members of the 501st Legion Ireland Garrison dressed as further characters including Rey and a snow trooper on a boat trip to Skellig Michael.

The most recent Star Wars trilogy was partially filmed on the small island.

In nearby Portmagee, as part of the town’s May the 4th Festival, young children practised their skills with a lightsaber by duelling on the grass.

On Twitter, Luke Skywalker actor Mark Hamill had his own twist on the celebration’s shrewd slogan.

Meanwhile Warwick Davis, who first appeared as an Ewok in the original Star Wars series and appeared again as the character Woollivan in The Force Awakens, shared a message with fans.

The United Nations Women Twitter account took the chance to pay their respect to Carrie Fisher, who died in 2016, for her “fierce portrayal of Princess Leia”.

“Carrie Fisher’s fierce portrayal of Princess Leia, a leader in a male-dominated universe, continues to inspire girls all around the (world) to never give up on their dreams,” it tweeted.

The National Library of Scotland decided there was space for a joke during the celebrations, offering a rather unique weather update.

And finally in Australia, Prime Minister Scott Morrison’s Liberal Party took things up a notch with a carefully edited photo of Obi-Wan Kenobi.

With Mr Morrison’s face edited onto the image of the Jedi character, a caption next to the politician reads “the economy is strong with this one”.