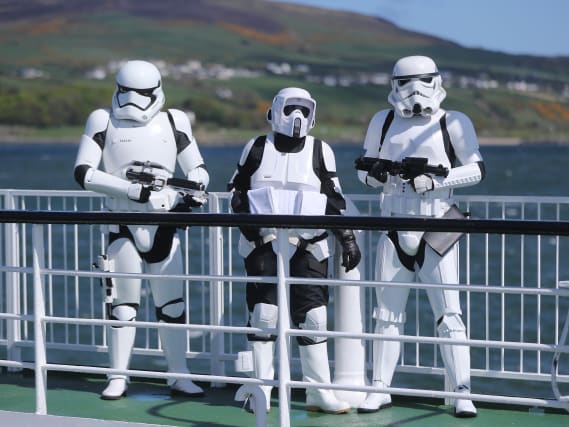 Star Wars fans have paid tribute to Chewbacca actor Peter Mayhew as they gathered in Ireland for the annual celebration of the film franchise.

Devotees of the films admitted the May the Fourth festivals, which are being held in Donegal and Kerry, will be tinged with sadness after the death of the British-born actor who played the famous Wookiee.

Mayhew died at his Texas home at the age of 74.

Star Wars events are held around the world on May 4, due to the date sounding like the film’s famous phrase – ‘May the Force be with you’.

In Ireland, two festivals are being staged over the weekend at locations close to where scenes from the most recent movies were shot – Malin Head in Co Donegal and in Portmagee in Co Kerry.

Tiffany Gutierrez, from New Mexico in the US, is a leader at the Galactic Academy, a Star Wars costuming club for children and Mayhew was an ambassador of her group.

“We were really shocked to wake up this morning to hear that,” she said.

“Especially with the coming weekend and all the festivals going on.

“He always made an appearance at Star Wars celebrations and different comic conventions.”

Jim McMinn, from Belfast, is a member of re-enactment group the 501 Legion Ireland Garrison.

“Another legend of Star Wars has gone,” he said.

“We were all in shock when Carrie Fisher went and now Peter has gone.

“It’s one of those iconic characters, Chewbacca. Everyone remembers this seven-foot walking carpet coming into their lives when they first saw the Star Wars movies.

“It’s a sad day. And around this weekend, which now epitomises Star Wars, for him to pass at this time just adds some extra sadness to it.”