ASOS features photo from woman whose dress was insulted on Tinder 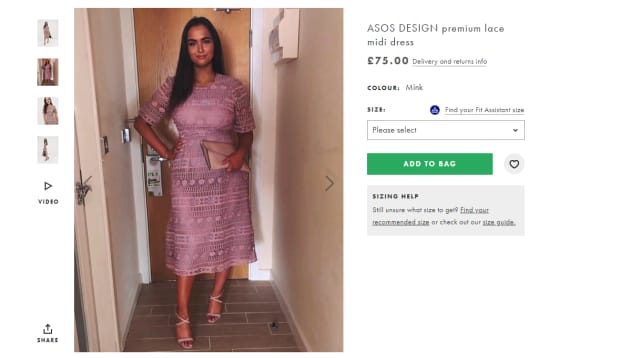 A woman who was insulted on a dating app for her choice of dress got the last laugh when retailer ASOS responded by making her a model on their website.

Thea Lauryn Chippendale, 20, shared an exchange on Twitter with a Tinder match who insulted her style, saying the pink lace dress in one of her photos was “not doing any favours”.

Ms Chippendale shared the conversation along with the outfit in question and Twitter users quickly jumped to her defence.

Ms Chippendale told Press Association: “I was really shocked and upset when I first the read the message on Tinder. I completely understand that people have different opinions on what they perceive as pretty or nice – but I just don’t understand why he went out of his way to be cruel and hurtful.”

Her tweet reached more than 100,000 likes, leading ASOS, the company who made the dress, to step in and help.

ASOS then featured Ms Chippendale’s photo, along with photos of one of their models, on its website advertising the dress.

“Swipe right to see who had the last laugh,” the company said on Twitter.

Many responded with positive comments and others said they would like to see more non-professional photos on the website.

One Twitter user said: “It’s amazing to see what the dress looks like on a real woman in a real setting. I wouldn’t have bought the dress based on the original pictures but seeing Thea’s picture I want it!”

Ms Chippendale said: “I am so overwhelmed with the influx of positive and lovely comments that I’ve had since posting the tweet.

“As for how ASOS have responded, I am absolutely gobsmacked and I think I will be for the rest of my life. I am so grateful that they’ve somehow managed to turn such a negative situation into such a positive one.”

Additional £20m pledged towards rehabilitation of drug addicts in Scotland