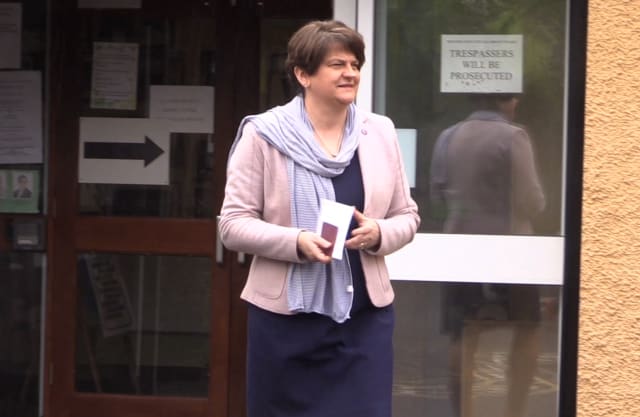 Northern Ireland’s political leaders have cast their votes in the local government elections.

DUP leader Arlene Foster voted in the Co Fermanagh village of Brookeborough, shortly after 9am.

She encouraged all to vote and “have their democratic say on the future of our local councils”.

“Local councils are hugely important in relation to the governance of Northern Ireland so it is important that people come out and have their say,” she said.

“I hope that they come out and give the DUP the strength to deliver, right across Northern Ireland.

“We have had a very good canvass right across NI and people are saying that they want to come out and support us, so I am looking forward to results day.”

“It’s also an opportunity to stand firm for equality, for rights and for Irish unity,” she added.

Polling stations in the council elections opened at 7am on Thursday and will close at 10pm.

A total of 819 local government election candidates are standing across 11 council areas.

Among noteworthy races for seats will be Sinn Fein’s former West Tyrone MP Barry McElduff’s efforts to return from the political wilderness.

He was forced to step aside after offending the families of those shot dead by republicans at the height of the Troubles in Kingsmill, Co Armagh.

Mr McElduff is running for a place on Fermanagh and Omagh District Council in the far west.

In Newtownabbey, near Belfast, the DUP’s first openly gay candidate is seeking election.

Alison Bennington is standing for a party which has repeatedly vetoed same-sex marriage and holds strong Christian values.

It is the first poll since gay journalist Lyra McKee, 29, was shot dead by dissident republicans during disturbances in Londonderry in April.

Her death prompted revulsion against the group blamed for the killing and a call by a Catholic priest for politicians to redouble efforts to restore devolved powersharing.

The Stormont Assembly and ministerial Executive have been suspended since early 2017.

Fresh negotiations are due to begin next week following Miss McKee’s death.

There are 1,463 polling stations across Northern Ireland.

There will be overnight verification of unused ballot papers returned from the polling stations, with councils ready to begin counting on Friday morning at 8am.

The election is being conducted by Single Transferable Vote, a proportional representation system.