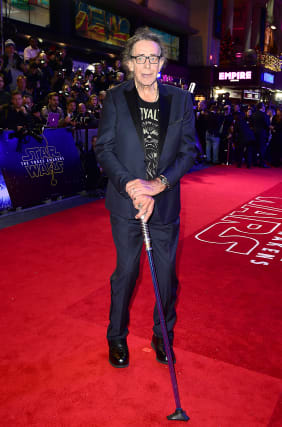 Peter Mayhew played perhaps one of the most instantly recognisable characters in cinematic history but will have been able to walk down most streets without being accosted.

The British-American actor, who has died at the age of 74, was the man in the suit of Chewbacca, the giant furry Wookiee warrior from the Star Wars films.

A loyal friend of Harrison Ford’s Han Solo, Chewy, as he was affectionately known, served as the co-pilot of the Millennium Falcon.

Peter Mayhew was born on May 19 1944 in Barnes, London, according to the website of his foundation, and was the son of a policeman.

He was diagnosed with gigantism at the age of eight, his foundation says, though there are conflicting reports online and he was quoted in 2014 by the Sydney Morning Herald as saying he did not have the condition.

“There was an overactive pituitary gland… I had treatment when I was about 15 that slowed it down, they stopped it,” he is reported to have said.

After leaving school, Mayhew had a short stint working in engineering but left to work as an orderly at London’s King’s College Hospital.

It was here where his life would change forever. A reporter took a picture of Mayhew, who at his peak was 7ft 3ins, and it was published in the local newspaper.

In 1976, the snap was spotted by the producers of fantasy film Sinbad And The Eye Of The Tiger, and Mayhew was cast as the Minoton, a magical robotic bronze creature.

His career is showbiz was born.

After finishing filming Sinbad, Mayhew returned to his job at the hospital and after about a year was invited to audition for George Lucas, who was working on a film titled Star Wars.

Mayhew got the job and with it a place in cinematic history. Star Wars was released in 1977 and became the highest-grossing film of all time.

Its sequels have grown the franchise’s popularity and it remains a pop culture phenomenon.

Mayhew did not reprise his role in 2017’s Star Wars: The Last Jedi, but is listed in the credits as a Chewbacca consultant.

He was also a regular fixture on the convention scene.

In 1999 he married his wife, Angie, before moving to Texas. After living in the US for six years, he became an American citizen in 2005.

Mayhew had three children. His death was announced in a statement on Twitter, which revealed he died on April 30 surrounded by his family at his home in Texas.