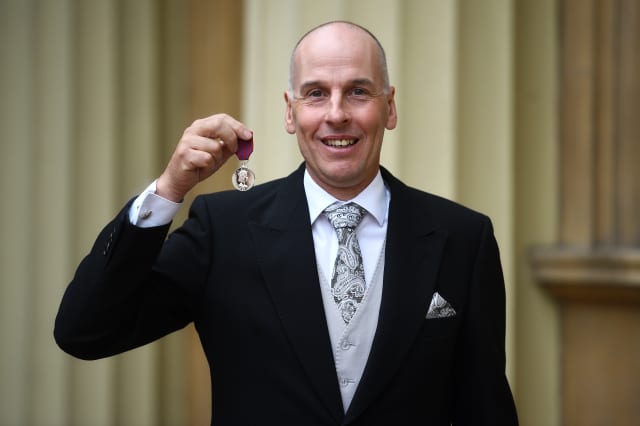 A diver who helped save the trapped Thai football team stranded in a flooded cave has spoken of his pride at taking part in the rescue mission.

Richard Stanton received the George Medal, the second highest civilian gallantry award, for his efforts from the Duke of Cambridge and said his biggest reward was taking part in an operation which had saved all those trapped.

The diver and fellow Briton John Volanthen were the first from the rescue team to reach the 12 children and their coach after making their way through the flooded underground complex as “path finders”.

Mr Stanton said he had ripped off his nails trying to find the boys, who became trapped last summer when monsoon rains began and flooded the caves.

Speaking about the moment they discovered the boys, he said he felt “relief that they were all alive”.

He added: “We were already thinking of the next stage, which was how on earth were we going to get them all out considering what we had been through to get to them.

“It was quite a weight of responsibility thinking we going to have to come up with a plan.”

The trapped children, aged between 11 to 16 and members of the local Wild Boars youth football team, had cycled with their coach to the caves to explore when they became marooned inside.

The British divers answered a call by Thai authorities to join the vast search after the group disappeared in the Tham Luang Nang Non cave system in Chiang Rai province on June 23 last year.

The boys’ parents reported them missing and a major search followed.

After the boys were discovered, rescuers still faced the treacherous task of getting the team safely out of the flooded cave and the persistent threat of bad weather heightened the tension in a drama that gripped the world for more than two weeks.

Seven Royal Thai Navy Seals and a medic joined the boys in the cave and the youngsters were given diving lessons as authorities continued to weigh up the two options – wait for conditions to improve or bring the boys out as soon as possible.

Both choices were fraught with danger and a stark reminder of the risk came when a former Thai navy Seal aiding the rescue effort died from a lack of oxygen during his mission.

With further flooding expected and oxygen running low, the boys had to be guided through nearly a mile of flooded caverns and tight passages.

Speaking about the moment the last boy was safe, Mr Stanton, a firefighter from Coventry, said: “That was amazing, we have a video of that and we’re all smiling and elated, because we couldn’t really drop our guard until that point.”

Mr Volanthen has already been awarded a George Medal and other members of the British rescue team were also awarded MBEs in the New Year Honours.

Mr Stanton said of the award, which he received during a Buckingham Palace investiture ceremony: “As far as I’m concerned this medal is a reward from the nation for what we did but really this is a symbol of the fact that we successfully rescued all the 13 people – and that’s got to be the biggest reward.”