Peter Mayhew, the actor who played Chewbacca in Star Wars, has died at the age of 74.

In a statement on Twitter, his family said he died on April 30 at his home in Texas.

They said: "The family of Peter Mayhew, with deep love and sadness, regrets to share the news that Peter has passed away. 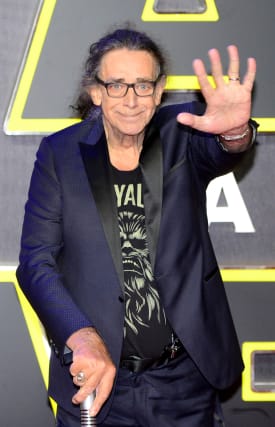 He became a naturalised US citizen in 2005 and is survived by his wife, Angie, and his three children.

The family's statement added: "He put his heart and soul into the role of Chewbacca and it showed in every frame of the films from his knock-kneed running, firing his bowcaster from the hip, his bright blue eyes, down to each subtle movement of his head and mouth.

"But, to him, the Star Wars family meant so much more to him than a role in a film.

"The relationships that began then grew into the friends and family that he would love for decades to come. As the films released and became more well known, he had his eyes opened to the possibilities of what he could achieve with his role in the Star Wars universe.

"For more than 30 years Peter travelled all over the world spending time with fans and friends. Peter developed lifelong friendships with the other cast members and his fans while on the convention circuit touching the lives of millions."

A memorial service will be held for friends and family on June 29 while in December a memorial will be set up for fans in Los Angeles.

The family asked fans to make donations to the Peter Mayhew Foundation.

Mayhew got the role in the original Star Wars film after creator George Lucas needed a tall actor to play hairy alien Chewbacca.

David Prowse, who was 6ft 6ins, was originally in the frame but chose instead to play Darth Vader.

Lucas discovered Mayhew, who was chosen purely for his height.

Mayhew did not reprise his role in 2017's Star Wars: The Last Jedi, but is listed in the credits as a Chewbacca consultant.

Police conducting checks on roads and transport hubs ahead of protests