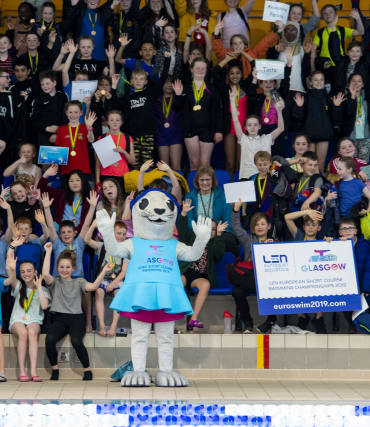 The official mascot for the LEN European Short Course Swimming Championships has been unveiled.

Bonnie the Seal made an appearance on Wednesday at Tollcross International Swimming Centre in Glasgow, where the event will be staged later this year.

It follows on from her time as the mascot at last year’s European Championships in the city.

Official ambassador Hannah Miley said: “I’m so excited that Bonnie is joining me for LEN European Short Course Swimming Championships for 2019, competing in front of a home crowd is such a special experience so I’m glad Bonnie is back in Glasgow.

“I’m really excited that Scotland has the opportunity to host another major international sporting event and I think as a nation we’ve shown over the last few years that we can put on a great show and I can’t wait for December.”

The championship takes place between December 4 and 8, with swimmers competing in 40 short course events.

Billy Garrett, director of sport and events at Glasgow Life, said: “We are delighted to announce Bonnie the Seal as Official Mascot for the 20th edition of the LEN European Short Course Swimming Championships today.

“Bonnie was such a brilliant mascot for the city in 2018 and we’re sure she’ll do another great job this year as some of the top European athletes from around the world compete at Tollcross in December.

“With Hannah Miley as official ambassador, Bonnie as our mascot and five days of first-class races, the countdown is now on for a truly unmissable event.”