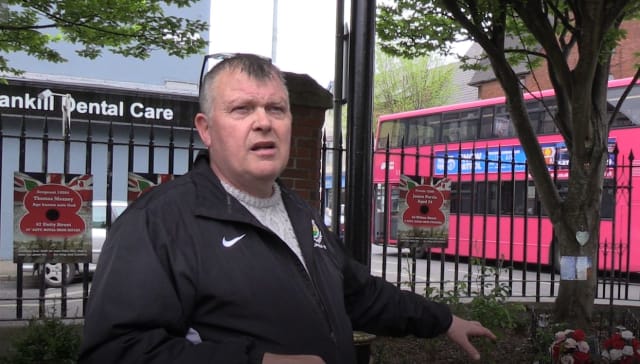 With Troubles tourism booming, a prison turned museum has launched a new walking tour telling the disputed story from three different perspectives – that of a Republican ex-prisoner, a Loyalist ex-prisoner, and the jail where both served time.

Crumlin Road Gaol stands in the middle of what was once a hotspot of violence where police and army struggled to contain bloodshed caused by bombs and gun battles.

But low flying helicopters in the skies, army vehicles on patrol, and masked men on the streets have now been replaced by crowds of curious visitors eager to see the still mostly segregated communities and towering peace walls for themselves.

Following a video giving a general background on Northern Ireland’s troubled past, the tour starts with a stroll around the Shankill Road with a Loyalist ex-prisoner who prefers to be known simply as Jim.

Jim openly explains how he got involved with the Ulster Volunteer Force, served a sentence at Crumlin Road Gaol, and even how he made a botched attempt to escape, before moving away from violence.

The Shankill is bustling with a number of walking tours gazing up at murals of gunmen, and Jim says he has seen a huge curiosity among visitors to see it for themselves.

He pointed out the bar on Malvern Street where in June 1966, 18-year-old Catholic man Peter Ward was killed, describing it as one of the first killings of the Troubles. Jim’s UVF colleague Gusty Spence was handed a life sentence for the murder.

Jim went on to explain the continuing hurt in the area caused by five major Republican attacks at different points on the Shankill Road, including the IRA bombing of a fish mongers in 1993 which killed nine people, including two children, as well as one of the bombers.

It is a short walk to the peace wall where the tour is taken up by an ex-Republican prisoner called Joe who shows us Bombay Street, where, in 1969, before the peace walls, homes belonging to Catholic residents were burned.

Joe’s take on the conflict is different to Jim, and he insists that the Provisional IRA were formed to protect Catholics following events like Bombay Street.

He conceded the IRA killed innocent people and committed atrocities.

“Most of them were down to the IRA’s economic bombing campaign, it was only designed to destroy the economy but especially in the early days these bombs were very much home-made, on occasions they exploded prematurely, killing those planting the bombs and killing innocent people as well.

“On other occasions it was complete and utter stupidity on behalf of some of these people carrying out the operations, and on other occasions the British military intelligence fought a very dirty war, and on occasion they were responsible for some of the things that happened over the years,” he said.

“I don’t get away from the fact that the IRA fought anything like a perfect war – there is no such thing – but the IRA were always very conscious of civilian casualties because they always paid the price for it in these areas.”

The experience ends with a tour of Crumlin Road Gaol itself where both Jim and Joe had served.

It includes the tunnel where prisoners were transported to the now-derelict Crumlin Road court house, the landings, cells and exercise yards.

It housed scores of political prisoners up to its closure in 1996, before re-opening its imposing Victorian doors as a tourist attraction in 2012.

The tour also includes a closer look at one of the last Wessex helicopters in Northern Ireland, which transported troops and VIP visitors during the Troubles.

The four-and-a-half hour tour is recommended for those aged 15 and over and costs £35, including a bowl of stew and a pint of Guinness.