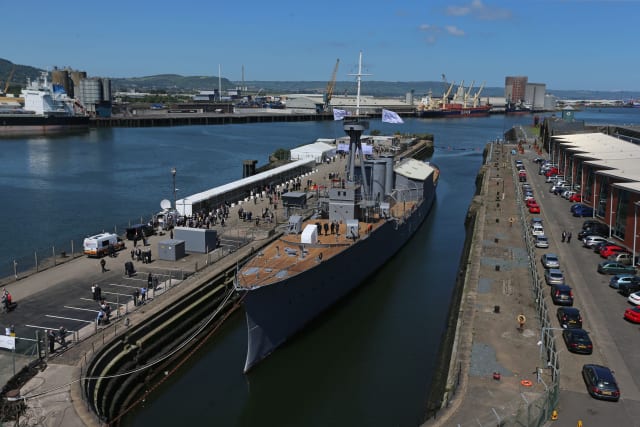 A First World War ship docked in Belfast has been shortlisted for the most prestigious museum prize in the world.

HMS Caroline is the last remaining floating survivor of the Battle of Jutland, in which the German Imperial Fleet clashed with the British Grand Fleet in what would be the last great naval battle in the world.

The light cruiser is among five museums shortlisted for the £100,000 Art Fund Museum of the Year award.

Restoration project director and the National Museum of the Royal Navy’s chief of staff Captain John Rees OBE said the ship’s overhaul provided a shared and neutral space for communities to learn about their shared history.

He said: “It is also a magnificent museum which reveals the human side of World War One, how life at sea during conflict was experienced and the impact of this on later generations.

“HMS Caroline has also become a platform for dramatic art productions, cinema screenings and other engaging activities, bringing some much-needed regeneration to this docks area of Belfast.”

The annual award celebrates innovation and exceptional achievement in museums and galleries across the UK.

The vessel was brought to Belfast shortly after the partition of Ireland and is an intrinsic part of Northern Ireland’s historic fabric.

The National Museum of the Royal Navy stepped in to save the ship from scrapping in 2011, secured a major grant from the National Lottery Heritage Fund and support from the Northern Ireland government to restore the ship and open it to the public in time for the centenary of the Battle of Jutland on May 31 2016.

The winning museum, which will receive £100,000, will be announced at a ceremony at the Science Museum in London in July.

On behalf of the judges, Stephen Deuchar said: “The five shortlisted museums have each offered outstanding and different approaches to the vital task of engaging with the widest public in new and adventurous ways.

“We congratulate all those who are on the shortlist and encourage everyone to go and visit them.”