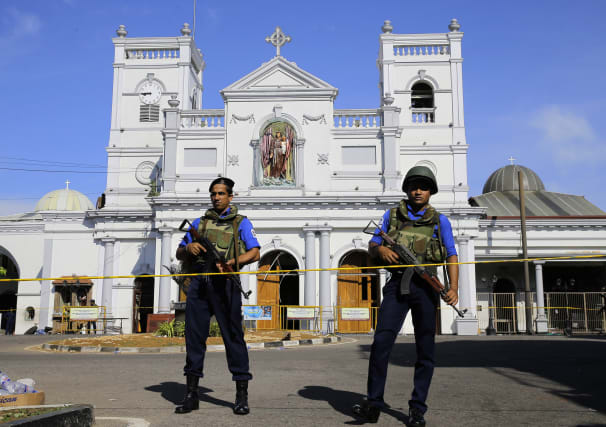 A group of Islamic extremists were behind the Easter Sunday terror attacks which killed almost 300 people, senior Sri Lankan officials have said.

But the group is believed to have links with foreign terrorist networks.

At least 290 people were killed in the explosions, with eight Britons believed to be among the dead, while more than 500 were wounded.

No group immediately claimed responsibility, but 24 people have been arrested in a series of police raids.

He said the terrorist attacks were “absolutely devastating and despicable” and “for this to happen on Easter Day is something that will shake people around the world, of all faiths and none, to the core”.

Sri Lankan High Commissioner to the UK, Manisha Gunasekera, said on Monday that eight British nationals were killed in the attacks.

She told BBC Radio 4’s Today programme: “As of now I think there is information on eight nationals who have lost their lives and the other numbers are of other nationals.”

Ms Gunasekera said the investigations were moving “very swiftly” but warned against taking a “linear view” on the motive of the attacks.

“This cuts across the ethnic and religious dimensions … it’s very difficult to see who has been targeted,” she said.

“It appears as if the entirety of Sri Lanka has been targeted as well as the unity and coexistence that Sri Lankans have attempted so hard to safeguard over the years.”

One line of inquiry will be asking what intelligence services knew about the attack, with Minister for Telecommunications Harin Fernando tweeting: “Some intelligence officers were aware of this incidence.

“Therefore there was a delay in action. What my father heard was also from an intelligence officer. Serious action need to be taken as to why this warning was ignored.”

In Colombo, St Anthony’s Shrine and the Cinnamon Grand, Shangri-La and Kingsbury hotels were targeted in the first wave of explosions shortly before 9am local time as worshippers attended morning services and tourists enjoyed their breakfasts.

Among the Britons believed to have been killed are Anita Nicholson, 42, and her 11-year-old son Alex.

They were reported to have been dining in the Shangri-La when the bomber struck.

According to her LinkedIn profile, Mrs Nicholson was based in Singapore as managing counsel at the mining and metals company Anglo American.

Hampstead and Kilburn MP Tulip Siddiq said she had lost a relative in the attacks.

She posted on Twitter: “It’s all so devastating. Hope everyone is keeping safe. Solidarity with the people of Sri Lanka.”

Prime Minister Theresa May said the Easter Sunday massacre was “truly appalling”, and “no-one should ever have to practise their faith in fear”.

At around the same time as the blasts in Colombo, explosions were also reported at St Sebastian’s Church in Negombo and at Zion Church in the eastern town of Batticaloa.

A few hours later, two more blasts occurred just outside Colombo, one of them at a guesthouse, where two people were killed, the other near an overpass.

Three police officers were killed during a search at a suspected safe house on the outskirts of Colombo when its occupants apparently detonated explosives to prevent arrest.

The authorities said at least 290 were killed and more than 500 injured in the attacks.

Britons caught up in the carnage in Colombo described the horrific scenes they witnessed.

He added: “My children and wife are traumatised by what they saw today.

“We will never forget this.

“We will always remember Easter Sunday for this reason now.”

Kieran Arasaratnam, a professor at Imperial College London Business School, was staying at the Shangri-La.

“Everyone just started to panic, it was total chaos,” he told the BBC. “I looked to the room on the right and there’s blood everywhere.

“Everyone was running and a lot of people just don’t know what was going on. People had blood on their shirt and there was someone carrying a girl to the ambulance. The walls and the floor were covered in blood.”

Nisanga Mayadunne, who studied at the University of London according to her Facebook profile, and her mother Shantha – a TV chef – were also reported to be among the dead.

Nisanga posted a photo of her family eating breakfast in the Shangri-La on Easter Sunday.

It emerged on Monday morning that Danish billionaire Anders Holch Povlsen lost three of his four children in the attacks.

Mr Holch Povlsen is the largest stakeholder in online fashion retailer Asos and is believed to be the largest private landowner in Scotland after buying a string of estates.

A spokesman for the businessman asked for the family’s privacy to be respected at this time.