UK will stand up for religious freedom, Theresa May vows in Easter message 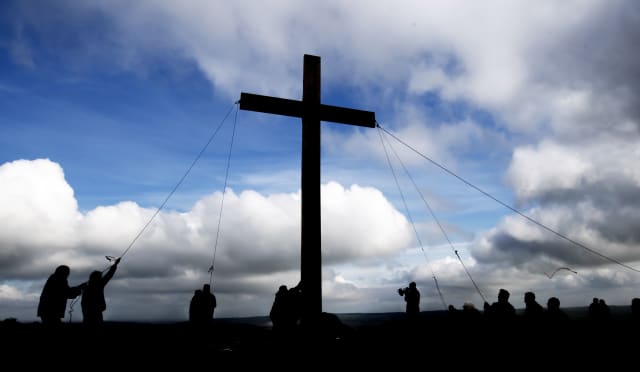 Theresa May has used her Easter message to offer support to Christians around the world who face “huge danger” because of their faith.

The Prime Minister said “we must stand up for the right of everyone, no matter what their religion” to follow their beliefs.

Labour leader Jeremy Corbyn used his Easter message to say Christ’s experiences as a refugee are “still familiar to us today”, and the current migration crisis is a “moral test” for politicians.

Mrs May uses her message to say she will spend Easter “giving thanks in church”, but “for many Christians around the world, such simple acts of faith can bring huge danger”.

She said: “Churches have been attacked. Christians murdered. Families forced to flee their homes.

“That is why the Government has launched a global review into the persecution of Christians.

“We must stand up for the right of everyone, no matter what their religion, to practise their faith in peace.”

Mr Corbyn used his message to compare the suffering endured by Jesus during his life to the challenges faced by refugees today.

He accused the Government of failing to take in child refugees and criticised Home Secretary Sajid Javid’s handling of the cross-Channel migrant boats over the winter.

He said Jesus was “a refugee whose parents were forced to flee their home because of a campaign of terror by a dictator, King Herod”.

Mr Corbyn said: “Jesus went on to know what it was to be ostracised, rejected and tortured. A family forced to flee their homeland for fear of persecution.

“Sadly, this is still so familiar to us today. There are 68 million refugees across the world, more people than have ever before been forced to flee persecution, war and abject poverty.

“The refugee crisis is a moral test. Jesus taught us to respect refugees. He himself said ‘welcome the stranger’.

“And the Bible says ‘the foreigner residing among you must be treated as your native-born’.

“In Britain, we have a proud history of providing a safe refuge to those in need. But this Government refuses to meet our legal obligations to child refugees in Europe as required by the Dubs Amendment.

“At the end of last year as refugees tried to cross the Channel, Sajid Javid threatened to deploy the Navy. But in response, the Bishop of Dover said ‘it is crucial that we all remember we are dealing with human beings here’.”

He said churches are leading the way in offering support to refugees, adding “we can learn from Christian values and offer the hand of friendship to welcome those in need”.