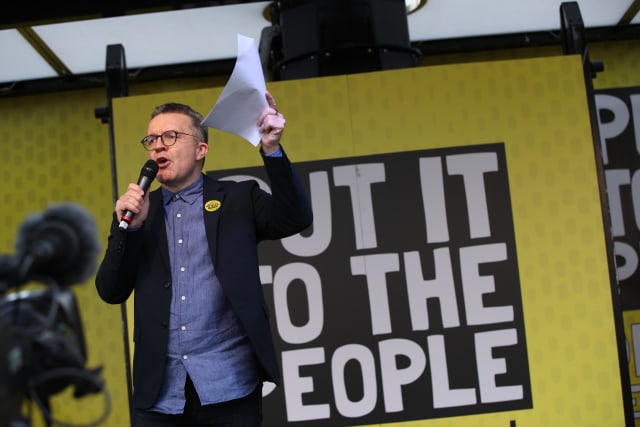 Labour must back a second Brexit referendum in order to respond to the electoral challenge posed by Nigel Farage, the party’s deputy leader Tom Watson said.

He said the party could not “sit on the fence” on the biggest issue facing the country, in comments which appear aimed at putting pressure on Jeremy Corbyn to make a second referendum a red line issue in Brexit talks with Theresa May.

A “confirmatory” referendum on any deal was “the very least” that voters should expect, Mr Watson said.

Writing in the Observer, the Labour deputy leader said: “Labour won’t defeat Farage by being mealy-mouthed and sounding as if we half agree with him.

“We won’t beat him unless we can inspire the millions crying out for a different direction.

“We won’t win if we sit on the fence about the most crucial issue that has faced our country for a generation.”

He added: “Now that we know a bit more about what Brexit means, the very least that Leavers and Remainers deserve is a final say – a confirmatory referendum – on any deal.

“They deserve a Labour party that offers clarity on this issue, as well as the radical vision for a new political economy achieved by working with our socialist allies inside the EU.

“And, above all, they deserve better than Nigel Farage’s promise of a far-right Brexit that would solve nothing.”

Mr Farage accused Mr Watson of breaking his promise to the British people, claiming a second referendum would be “a total insult” to five million Labour Leave voters.

“I now intend to wholeheartedly target Labour lies and dishonesty in the weeks ahead,” he warned.

The momentum generated by Mr Farage’s Brexit Party has also sent shockwaves through the Conservative Party.

A survey of 781 Conservative councillors for the Mail On Sunday found 40% were planning to back the Brexit Party at the May 23 European elections.

Just over half – 52% – said they would vote Tory at the European election, a figure that would rise to 65% if Theresa May was replaced by Brexiteer Boris Johnson, the Survation poll for the Mail On Sunday found.

Some 15% of those surveyed said they believed Mr Farage would be the best leader of the Conservative Party – only Mr Johnson was ahead of him on 19%.