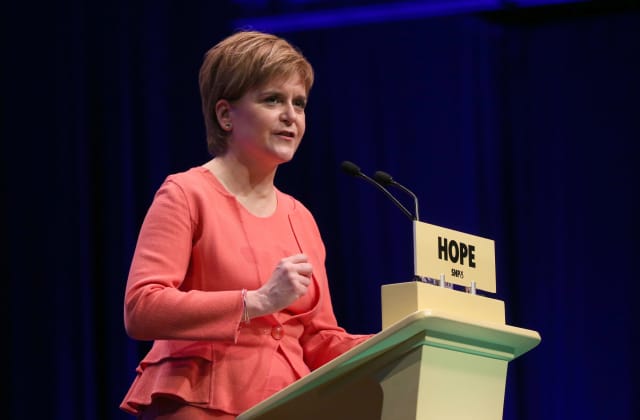 There are more people in Scotland now open to hearing the arguments for independence as a result of Brexit, Nicola Sturgeon has said.

Writing in The National newspaper on Saturday, the First Minister set out her vision for what an independent Scotland could look like, as well as addressing the economic case including the question of currency.

Ms Sturgeon also said that it is the responsibility of independence supporters to persuade others that it is the best answer to the current questions faced.

“In 2014, many who ultimately voted No were open to persuasion,” The First Minister wrote.

“With Brexit destroying any sense that the UK offers a stable and prosperous future for Scotland, there are even more people now open to the arguments for an independent Scotland.

“So the responsibility of all of us who support independence is to persuade those who are open-minded that it is the best answer to the questions we face.”

The First Minister also addressed the report published by the Sustainable Growth Commission, stating that it is not and was not intended to be a “policy manifesto for the entire Yes movement”, but would instead provide a framework and options for addressing challenges.

Ms Sturgeon added that the report demonstrates the untapped economic potential of the country.

However, Ms Sturgeon said that it would be important to give people the confidence that a transition process to an independent currency would be “well planned” and “robustly governed”, as well as being in the interests of citizens and businesses.

Writing ahead of the SNP conference in Edinburgh next weekend, the First Minister added that different views both within and outwith the Yes movement are “perfectly legitimate” and said that open and honest debate is a strength of the independence movement.

She wrote: “Talking about the opportunities of independence is much more positive than resigning ourselves to the deep despair of Brexit.

“Turning our debates into reality depends on winning a majority for independence – and that means persuading Scotland in all its diversity that it is the best way forward. It is that task, more than any, that unites our movement. And it is that task to which we must devote our energies.”

Scottish Conservative interim leader Jackson Carlaw accused the First Minister of choosing to focus on independence, rather than addressing issues such as education.

Mr Carlaw said: “It is depressing but not surprising that, ahead of the SNP conference, Nicola Sturgeon is once again focusing on her plans for independence, rather than the key challenges that Scotland faces right now.

“Scotland said no to independence nearly five years ago. Most people want to move on, but it’s clear that Nicola Sturgeon won’t let it go.

“We either face years more of Nicola Sturgeon putting her obsession before everything else, or we can have a fresh government led by Ruth Davidson which wants to get on now with making Scotland a better place for everyone.”