Brexit ‘an aberration’ in bid to strengthen peace process – Pelosi 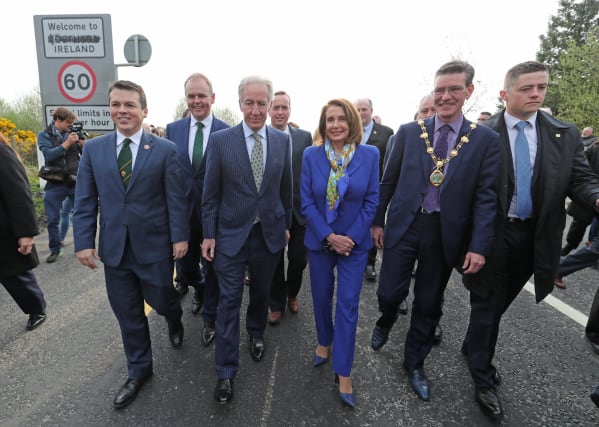 Brexit should be just an “aberration” in the bid to strengthen Northern Ireland’s peace process, US congresswoman Nancy Pelosi has said.

The US House of Representatives speaker visited the Irish border which has become a stumbling block to the UK’s EU withdrawal.

She was greeted by anti-Brexit campaigners during her short stop at the frontier on Thursday morning.

The senior Democrat from California said the US had a vested interest in peace in Northern Ireland which was sealed by the 1998 Good Friday Agreement.

She said: “We have said that we are guarantors for the Good Friday Agreement because we believe it is fair to both sides – that is why they agreed to it.

“We believe that Brexit should be just an aberration in this discussion as we continue to build and strengthen our peace that was generated by the Good Friday accord.”

She has repeatedly railed against the prospect of a hard Irish border during her tour of Ireland with congressional colleagues.

Earlier this week she warned that US trade talks with the UK could be endangered if the agreement which largely ended decades of violence was compromised.

The DUP’s opposition to the backstop insurance policy, which would keep Northern Ireland’s regulations aligned with the EU to protect the free-flowing frontier, helped thwart Theresa May’s bid to get her withdrawal deal through Parliament.

Some believe any reimposition of a hard border and checks at the frontier due to a no-deal Brexit could encourage a return to violence, although that is contested by many unionists.

The British Government has said it does not intend to put infrastructure there.

Ms Pelosi said: “We come here out of respect for the courage of those who participated in the Good Friday accord.”

Dermot O’Hara, a spokesman for Border Communities Against Brexit, greeted her at the frontier.

“This is a British border here, we want the border to be in the Irish Sea and we appreciate the visit by the delegation and their support for the rights of the Irish people.”

John Boyle, mayor of Derry City and Strabane Council, said it was evident Ms Pelosi was determined to protect the integrity of the agreement.

“They will support us in ensuring it does not impact on that very important agreement which was signed in 1998.”

He said a hard border would be difficult to deal with psychologically.

“Many of us going back generations remember what a hard security border looked like here.”

Joe McHugh, education minister in the Republic and Donegal public representative, said the visit of the third most powerful politician in the US was very important.