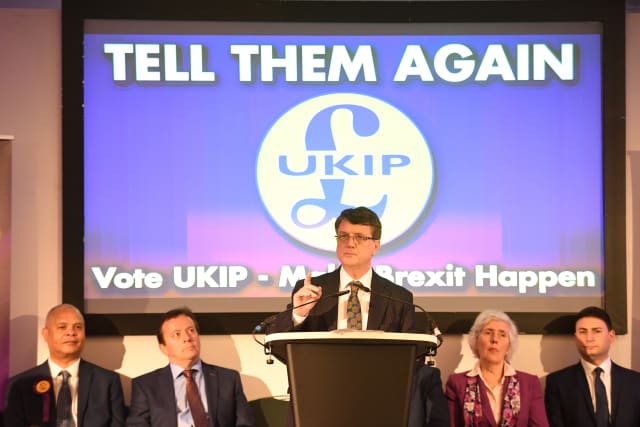 Ukip leader Gerard Batten insisted his party is the “true” voice of Leave voters as he sought to counter the threat posed by Nigel Farage.

Mr Batten, whose party has been reduced to a rump in the European Parliament after defections to Mr Farage’s new Brexit Party, insisted Ukip has a future.

But Mr Farage said his former party had been “destroyed” by a “lurch towards extremism”.

At the launch of Ukip’s European election campaign, Mr Batten said the May 23 contest would “inevitably be a re-run” of the 2016 Brexit referendum.

Under the slogan “Tell them again”, Mr Batten told the event in central London that the referendum result had been “deliberately and cynically betrayed” by politicians.

In a message clearly aimed at voters who might consider backing Mr Farage’s new vehicle, Mr Batten said: “Ukip is the authentic party of Brexit, the true party of Leave.”

He played down the importance of Mr Farage in Ukip’s past success, insisting the party and the referendum result were “not the province of one man”.

And he said Ukip is a “real” party not a group of “rebel MEPs”.

Mr Batten said Ukip wanted “unilateral and unconditional withdrawal” from the EU “no ifs, no buts”.

But Mr Farage said: “As Ukip launch their Euro election campaign, they now have just three MEPs. The Brexit Party has 16.

“The lurch towards extremism has destroyed Ukip.”

The Brexit Party has 14 MEPs listed – although Mr Farage claims the support of two more.