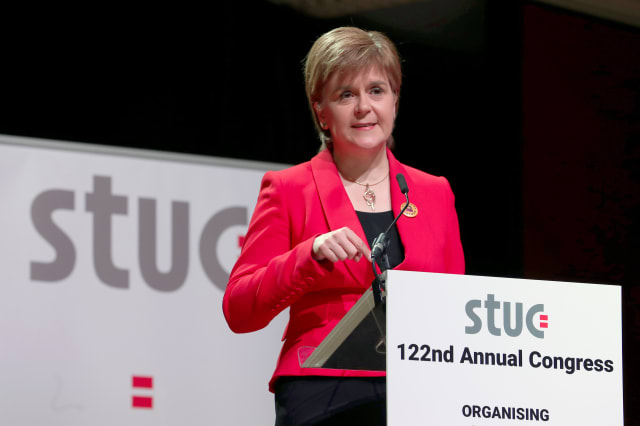 Scotland wants no part of Theresa May’s “despicable” hostile environment, Nicola Sturgeon has said, as she urged action against “xenophobia” in politics.

Addressing the STUC conference in Dundee, the Scottish First Minister said the treatment of EU citizens in the UK is one of the most “shameful” aspects of Brexit.

She warned the damage of any form of Brexit could not be fully mitigated, and said there would be “nothing disorderly” about Scotland leaving the UK following a vote for independence.

“We reject utterly the dog whistle xenophobia that is too prevalent in political discourse and we stand firm and united against the rise of the far right.

“One of the most shameful, and I use that word deliberately, shameful aspects of Brexit has been the treatment of EU citizens living here in our country.

“No-one, least of all me, pretends that Scotland is somehow immune from racism. We are not, but the message that we as leaders must send is this one – Scotland is an open country, we are a welcoming country. We want people to come to Scotland and we want people to stay in Scotland.

“Diversity is not a weakness. Diversity is a strength to be celebrated and we are determined to do that.”

She warned any form of Brexit would harm living standards and risk jobs, calling on the UK Government to use the extension to October 31 to drop its “damaging red lines” and talk with all parties and devolved governments on the future relationship with Europe.

She also called for a second referendum on any deal reached.

The First Minister said: “My hope – although this is in no way guaranteed – is that in a second referendum, the UK as a whole would opt to remain.

She said the consequences can be mitigated but not prevented completely.

Speaking after her address to the congress, she said: “There will be nothing disorderly about Scottish independence when it happens.”