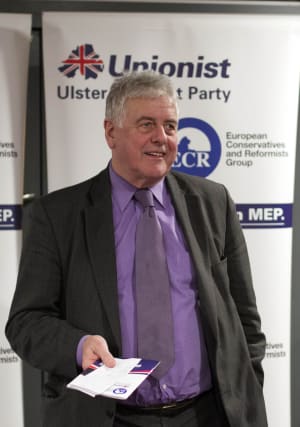 An Ulster Unionist outgoing MEP has ruled out running in next month’s elections.

Jim Nicholson represented the party in Brussels for 30 years.

He said: “I said a few weeks ago that it was time to hand the baton on and that is still my belief.

“Therefore I won’t be putting my name forward to seek selection as the Ulster Unionist Party’s candidate in the forthcoming European elections.

“It has been an enormous honour to represent Northern Ireland in the European Parliament for the last 30 years as an Ulster Unionist MEP.”

He said he had always endeavoured to do what was right for all, no matter their background.

“I worked with Ian Paisley and John Hume to secure peace funding from Europe and it’s something of which I am enormously proud.

“I want to wish all the best to whoever is nominated as the Ulster Unionist Party’s candidate.”