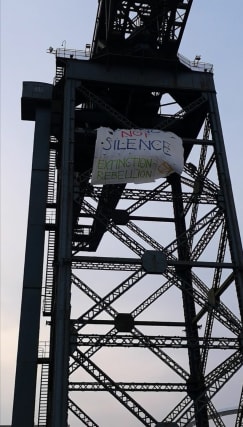 On Monday, members of Extinction Rebellion Scotland climbed the crane and hung a banner reading ‘science not silence’, at Pacific Quay.

Police arrived at the site at around 7am and removed the campaigners, although no arrests were made.

The action is part of an international week of protests calling for governments and councils around the world to declare a climate emergency.

Protests are also expected in Edinburgh and London at Parliament Square on Monday morning.

Explaining the reasons for protesting, one Extinction Rebellion member said: “We are just ordinary citizens and we want the council to act responsibly and save us from this accelerating disaster which may lead to serious flooding and food shortages in Scotland and across the world.

“27 other UK councils have declared a climate emergency. Why hasn’t Glasgow?”

In January this year, around 40 Extinction Rebellion activists occupied the debating chamber at the Scottish Parliament, staging an hour-long sit-in.

Daryl Tayar, another member of Extinction Rebellion, added: “I’m sure Robert Burns would’ve been happy to wear such a symbol – his poetry shows just how much he loved the environment and of course how radical his politics were.

“If he were alive today, he’d be asking the City Council to declare a climate emergency urgently.”