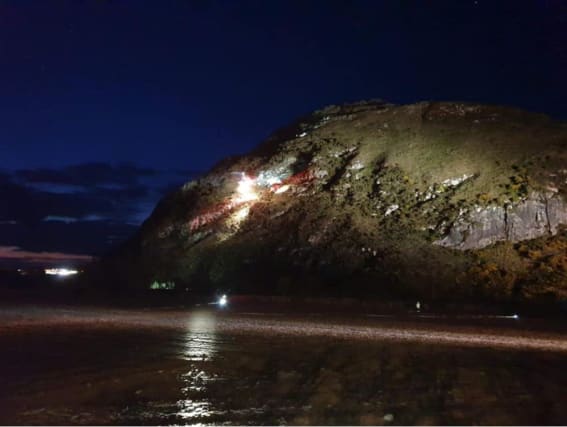 A man had to be airlifted from a hillside in the early hours of the morning after falling from a cliff edge following a “night on the town”.

Emergency services were alerted to three people being stranded at North Berwick Law in the Scottish Borders at around 1.45am on Saturday.

A rescue operation was launched by Police Scotland, which involved the fire service, ambulance and Borders Search and Rescue Unit (BSRU) as well as coastguards.

One man suffered injuries and was airlifted by helicopter to Edinburgh Royal Infirmary, where he is being treated.

He was bleeding from the head and there were fears he could also have internal and spinal injuries.

The two other men who were recovered were uninjured, according to the Scottish Fire and Rescue Service.

They were all estimated to be in their early 20s.

Bob McKeand, BSRU team leader, said: “They were three lads out after a night out on the town.

“The information we have is they were out for a jaunt.

“One of them fell and got fairly seriously injured.

“There was certainly bleeding from the head. Possible other injuries, in terms of spinal and internal.”

Conditions were described as cold, clear and still.

Two BSRU members abseiled down to the casualties and secured the injured man.

A rope access fire crew then assisted with the airlift operation.

The two other men were helped from the hillside by ambulance and BSRU members.

A Police Scotland spokesman said: “A multi-agency response was co-ordinated after a call was received at 1.45am on Saturday.

“The males were successfully recovered from the hillside and one of the males was taken to Edinburgh Royal Infirmary where he is being treated.”