Emirates marks Glasgow milestone ahead of A380 service 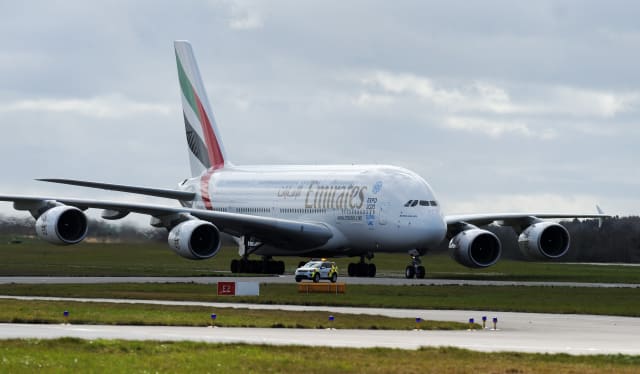 Emirates has marked 15 years since arriving in Glasgow, just a week before starting a new service with an A380 aircraft.

The airline first touched down at the city’s airport in 2004 with more than 4.5 million passengers travelling between there and Dubai since.

On April 16 the A380 will be used for the first regular service to Scotland, which will run until September 30.

Mark Johnston, Glasgow Airport managing director, said: “The introduction of Emirates’ Dubai service in April 2004 was a major coup for the airport and Scotland.

“We were confident the service would be a success and in the 15 years that have followed there have been so many milestones.

“Emirates and Glasgow Airport will create another piece of Scottish aviation history next Tuesday with the arrival of the A380 – the first time the world’s largest commercial passenger aircraft has been introduced to a scheduled service in Scotland.

“We are extremely proud of the close relationship we have fostered with Emirates over the years.”

As part of preparations for the A380 service, Glasgow Airport bosses overhauled the runway and docking station with the weight of the aircraft (575 tonnes).

The route has also acted as a cargo transport with more than 80 million kilos exported from Scotland including salmon, whisky and oil well parts.

Richard Jewsbury, Emirates divisional vice-president, said: “It is fitting that such an important milestone for Emirates in Scotland should come a week before we bring our iconic A380 to Glasgow.

“Since the first Emirates aircraft landed in Glasgow 15 years ago, Scotland has been a major market for us and a key part of our growth strategy in the UK.

“Not only do a lot of Scottish travellers fly with us for holiday or business, but many people from around the world travel to Scotland to discover the beautiful country, or to do business.

“Scotland has proven so popular since we started flying there that we introduced an Edinburgh route last year.”