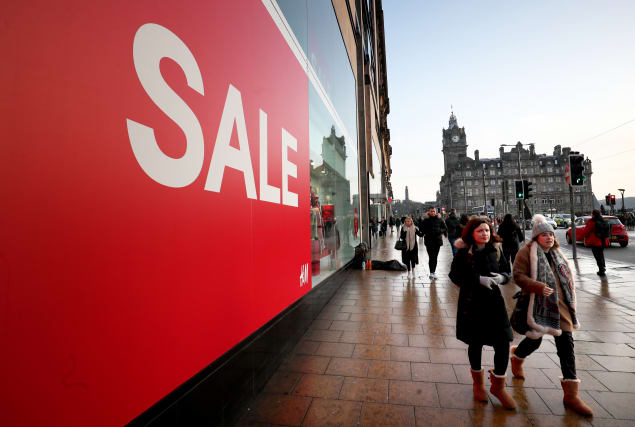 Shops on Scotland’s high streets are closing at a rate of more than five a week, according to new analysis.

The number of stores in eight Scottish cities and towns fell by 119 in 2018, with 265 closures offset by 146 new store openings.

It follows a record net loss of 148 in 2017, according to the study published by PwC.

The number of shop closures outnumbered openings in all eight areas included in the research.

Both Edinburgh and Glasgow ended the year with 32 fewer shops, with 68 and 89 closures respectively.

In Aberdeen, 15 new shops opened but 42 closed, while Paisley suffered the greatest impact as a proportion of its total shop numbers, down nine to 114.

Perth had the fewest closures with seven, although just four new stores opened up during the year, according to the figures.

Ayr and Perth each had a net loss of five stores and the number of shops in Falkirk dropped from 130 to 124 over the course of 2018.

Mark Addley, head of business recovery services for PwC in Scotland, said: “We may have seen a reduction in the number of stores closing across Scotland but this is coupled with store openings at almost half the total we were seeing five years ago so there remain enormous challenges across our high streets.

“We have already seen casualties in 2019 and we fully expect to see more, with retail companies facing an uphill battle to survive, never mind thrive.

“To be in the best possible shape to get through this, retailers must focus on ensuring they have the right proposition, and the investment required to deliver it.

“In the immediate term, retailers need full-scale solutions which sustainably cut costs and allow for new money investment to bridge the lag between the cost of a restructuring and long-term performance improvements, all while fully addressing the needs of their customers.”

In 2017, the number of closures dropped to 290 but a big reduction in new openings led to the record net loss of 148 shops.

She said: “We saw an acceleration in footfall decline on the high street with businesses continue to see the impact of online shopping, increasing costs and subdued consumer spending.

“We know that the high street is seen as a barometer for wider economic issues and there are signs that Brexit is affecting how we spend.

“Two in five consumers tell us Brexit will affect their spending this year, with half of those saying they’ll spend less, and a third saying they’re postponing big-ticket purchases.”

But added: “High streets still have an important role to play. For example, consumers told us that half of their Christmas shopping spend was done in physical stores.

“But given the continued trend to shopping online, retailers, landlords and policymakers need to think about the amount of space dedicated to retail.

“We believe that in future Britain will need less, but better invested, high street space that gives consumers variety, service, convenience, ease of access, entertainment, and, above all, a reason to visit.”