‘I feel like a queen’ says top slimmer Lucie, after dropping 16 dress sizes

A 21-year-old who lost more than 10 stone said she feels "like a queen" after proving her childhood bullies wrong.

At her heaviest, Lucie Hadley, a school worker from Peterborough, weighed 19st 3lbs (122kg), and feared going to school and joining her mother on shopping trips.

However, after years of hiding in the changing rooms to avoid PE, Lucie has lost 10st (64kg) and now weighs 9st 3lbs (58kg), and has fallen 16 dress sizes.

After being crowned Slimming World's Young Slimmer of the Year for 2019, she said: "It's been a brilliant experience, I feel like a queen right now, I cannot believe this has happened. I used to look at my body wishing it was a suit I could just tear off, now I'm ready to show off my body."

She added: "I've got a zest for life, I'm so bouncy and bubbly and confident now. You can't stop me talking, I just keep going and going. 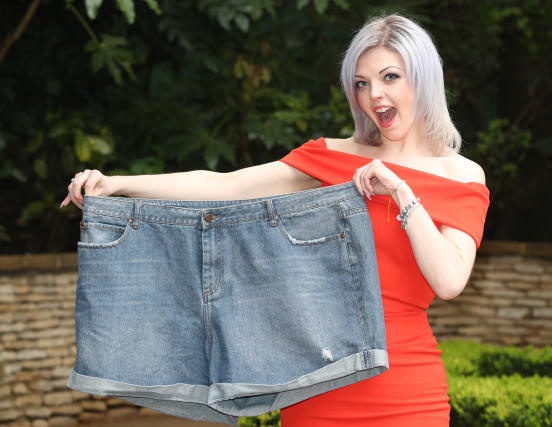 "It's nice to not disappoint my parents any more. When they would ask if I wanted to go out, I'd always say 'no', and the disappointment on their faces used to upset me, now they can't stop me from going out.

"My partner used to walk half a mile in front of me when I was overweight, now we're walking together, hand in hand, we're like a real couple, not one that hides away."

She is now able to go to water parks and take part in trampolining, jet-skiing and paragliding, which she could not do before because of weight restrictions.

Lucie also began riding a bike for the first time in 10 years.

During her school years she was teased for her weight and moved classes many times because of bullying.

She had food thrown at her in the canteen, hearing the remark: "She'll eat it, she eats everything."

Lucie recalled: "When I was at school, barely a day would go by when people wouldn't mention my weight. School life was very upsetting for me and I moved classes many times because of bullying.

"PE lessons were the worst, I'd try to convince my mum to write me a note so I didn't have to change in front of people and I was terrified of doing physical activities like the bleep test.

"Sometimes I'd just hide in the changing rooms and cry. My confidence at that time was rock bottom and the bullying just made everything worse."

However, Lucie's confidence changed after meeting her boyfriend Sam who would tell her she was beautiful, which spurred her on to make a change.

On learning her mother joined a local Slimming World group, she was encouraged to go along with her and adopted Slimming World's Food Optimising eating plan.

She stocked her cupboards with pasta, potatoes, fruit, vegetables and eggs and lost 5lb in the first week.

"Sam and I recently went on our first holiday together and for the first time I finally felt like a young woman who was just enjoying herself and living in the moment.

"I even wore a bikini for the first time ever, which is something I used to dream of. When I look at the person in the mirror now, I feel full of pride for what I've achieved.

"I've created a healthier and happier future for myself and most importantly, I haven't let the bullies win. I might have let my teenage years pass me by, but now I'm determined to grab life with both hands."

To lose the weight, she changed her menu to focus on food without cutting out her favourite types.

"I was spending about £50 a day on takeaways before Slimming World because I used to literally pick up food.

"I wouldn't just have one of everything, I would have two of everything just to make sure that if I was still hungry a little bit later, I'd have something.

"I'd have a few snacks along the way, but now I've learnt moderation and self-control of food and not to be so greedy. I haven't had to cut any food out, it's about making your own."