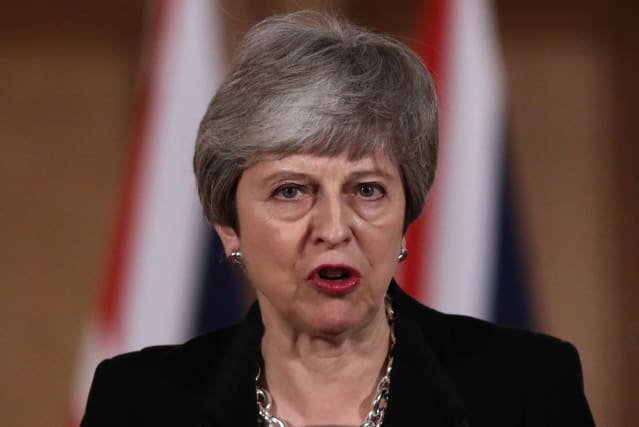 Brexit talks between the Government and the Labour Party were resuming on an official level on Monday evening after four days of little apparent progress.

In jointly released statements, Downing Street and Labour said “technical” talks were restarting after dialogue by phone and email over the weekend.

There was no official confirmation of BBC reports that the Government had made a fresh offer of a legislative “lock” to prevent a future Conservative leader from unpicking any agreement reached by Theresa May.

With only two days to go to a crunch Brussels summit at which the other 27 EU member states will decide whether to grant the Prime Minster’s request for a further delay to Brexit, Downing Street insisted Mrs May was treating the cross-party talks with “urgency”.

But there appeared little prospect of a compromise agreement being in place in time for Wednesday’s EU meeting, and no chance of it being approved by MPs before the EU27 meet.

Mrs May is to make a whistle-stop trip to Berlin and Paris for last-minute talks with Angela Merkel and Emmanuel Macron on the eve of the emergency summit.

And she spoke by phone with European Council president Donald Tusk, European Commission president Jean-Claude Juncker, Dutch PM Mark Rutte and Malta’s Joseph Muscat to set out the case for extending the Brexit process to June 30.

The unanimous agreement of all 27 is needed to avoid the UK leaving without a deal on Friday.

Mr Tusk has recommended a one-year extension to the Brexit process, with a break clause allowing an earlier departure if a withdrawal deal is ratified in Westminster.

Following his call with Mrs May, Mr Rutte said it would be “crucial” for the EU27 to know “when and on what basis” the UK will ratify its Withdrawal Agreement.

He said they would need assurances of “sincere co-operation” from London before granting an extension.

Speaking during a visit to Dublin, the EU’s chief Brexit negotiator Michel Barnier said the UK could not escape demands for a £39 billion payment and a “backstop” for the Irish border by quitting without a deal.

“If the UK were to leave the EU without a deal we would not discuss anything with the UK until there is an agreement for Ireland and Northern Ireland as well as for citizens’ rights and the financial settlement,” Mr Barnier told Irish premier Leo Varadkar

“You have our full support and, I have said before, the backstop is currently the only solution we have found to maintain the status quo on the island of Ireland.”

Mr Varadkar said he was “confident” of agreement on an extension at Wednesday’s summit.

Tuesday’s weekly meeting of Cabinet has been cancelled due to Mrs May’s travels, with no rescheduled date announced. A number of Cabinet ministers attended Downing Street for a scheduled meeting of the EU subcommittee on Monday.

The Prime Minister has angered Tories by holding talks with Labour, with Brexiteers including Boris Johnson concerned that she will accept a customs union as the price for a deal with Jeremy Corbyn.

Negotiations stalled after Labour said the Prime Minister refused to set out any changes to her Brexit red lines.

He told the BBC: “At the moment we’re waiting to see what the Government is putting on the table as a proposal.

“All they have done so far is to indicate various things but not to change the Political Declaration, so the ball is in the Government’s court.

“We need to see what they come back with and when they do we will take a collective position on that.”

In a video message recorded in her Chequers country retreat at the weekend, Mrs May said both sides in the cross-party talks will have to compromise.

The Prime Minister acknowledged she could not see the Commons accepting her deal in its current form and MPs would not agree to a no-deal exit.

If no deal can be reached with Labour, Mrs May has committed to putting a series of Brexit options to the Commons and being bound by the result.

She hopes to have a solution ratified in time to allow the UK to leave the EU by May 22, avoiding the need to take part in European Parliament elections the following day.

But Mr Johnson warned that Tory MPs will not allow Mrs May to “surrender” to Mr Corbyn, who is demanding involvement in a post-Brexit customs union arrangement with the EU as part of the price for Labour support.

“If the UK were to commit to remaining in the customs union, it would make a total and utter nonsense of the referendum result,” said the former foreign secretary in his regular column in the Daily Telegraph.

“To agree to be non-voting members of the EU, under the surrender proposed by Jeremy Corbyn – it cannot, must not and will not happen.”

Another prominent Brexiteer, Mark Francois, called for an “indicative vote” among Tory MPs on the PM’s future on Wednesday to send a signal to the Brussels summit that Mrs May has lost the confidence of her own side and cannot deliver a Brexit deal.

But it is understood that the executive of the backbench 1922 Committee considered this option last week and decided it was not appropriate at this stage. A formal confidence vote cannot take place until December.

Meanwhile, the House of Lords was continuing its consideration of Yvette Cooper’s backbench Bill forcing the Prime Minister to request a Brexit extension rather than leave the EU with no deal.