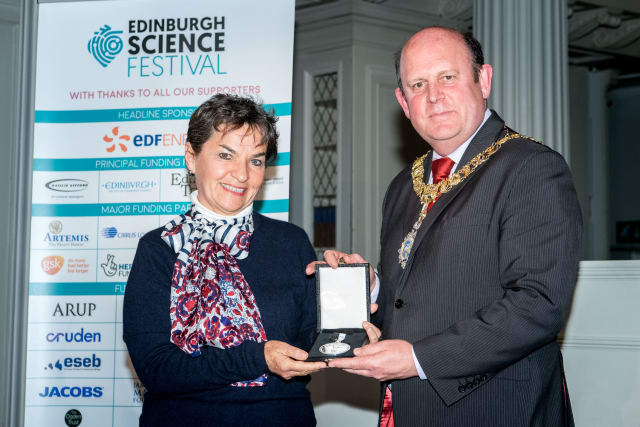 A former UN executive secretary who played a key role in the Paris climate talks has been awarded a medal as part of the Edinburgh Science Festival.

Christiana Figueres was presented with the Edinburgh Medal for her work as a world leader on global climate change and her efforts in bringing nations together to deliver an unprecedented climate change agreement.

Ms Figueres was Executive Secretary of the UN Convention on Climate Change from 2010 to 2016 and was said to be instrumental in the successful conclusion of the Paris talks on climate change.

Under the 2015 Paris Agreement, countries have committed to keeping global temperature rises well below 2C above pre-industrial levels and to pursue efforts to curb them to 1.5C.

The Edinburgh Medal was introduced by the City of Edinburgh Council in 1988 and is awarded to men and women of science and technology who have made significant contributions to humanity.

Ms Figueres said: “It is a true honour to join a long list of illustrious recipients of the Edinburgh Medal, in our collective quest to advance science as the basis of policy and innovation.”

She was presented with the award on Friday and gave a Medal Address at the Signet Library as part of the Edinburgh Science Festival.

Environment Secretary Roseanna Cunningham said: “Christiana Figueres played a defining role in the adoption of the 2015 Paris Agreement, with her passion, drive and persuasiveness being fundamental to that historic commitment being taken by more than 190 nations.

“It is extremely fitting that Ms Figueres has been awarded the prestigious Edinburgh Medal, and I was honoured to have the opportunity to provide the oration at her award ceremony.”

This year’s Edinburgh Science Festival programme is themed around frontiers in celebration of the 50th anniversary of Moon landing and runs from April 6-21.

MP apologises for travelling to and from Parliament with Covid-19

Belarus defector speaks out against police