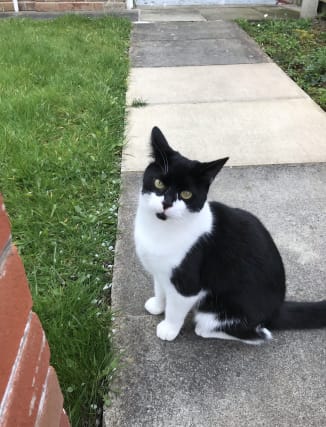 A pet cat is recovering after being shot in the neck with an air gun.

Black-and-white Romeo was found whimpering by his owners on Monday when he managed to make his way back to his home in Croxteth, Liverpool, after being injured in what RSPCA inspectors believe may have been a deliberate attack.

The air gun pellet, which could be seen lodged in his skin, was removed by vets and two-year-old Romeo is now improving and back to exploring his garden.

RSPCA Inspector Helen Smith said: “Poor Romeo must have been in such a lot of pain after being shot, and he’s a very lucky boy that the injury wasn’t more serious.

“Sadly, we do see cases where pet cats are shot and suffer catastrophic injuries, some having to have a leg amputated or even some not making it and dying as a result of their injury.

“It’s possible that Romeo was shot by accident, but also I am concerned that he may have been deliberately targeted.

“Anybody with any information about who may be responsible for injuring Romeo can call our inspector’s appeal line number on 0300 123 8018, where they can leave me a message in complete confidence.”