Osprey lays her first egg of the season 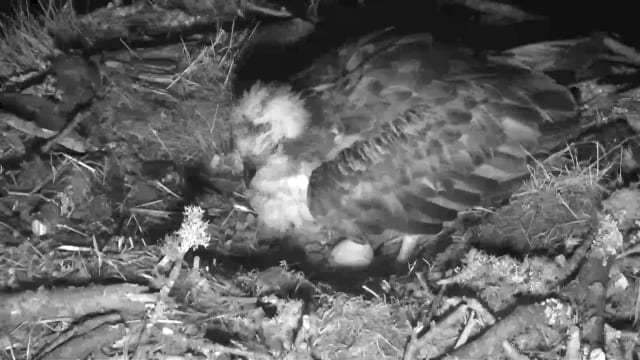 An osprey has laid her first egg of the season at a wildlife reserve in Perthshire.

The bird, known as LF15, laid the egg on Thursday evening after an afternoon of fidgeting and nest renovations.

Staff at the Scottish Wildlife Trust’s Loch of the Lowes Wildlife Reserve noticed contractions before the egg was laid just after 8.30pm.

Sara Rasmussen, Perthshire ranger at the Scottish Wildlife Trust said:  “LF15 and her mate LM12 have successfully fledged 10 chicks since 2015.

“2019 marks 50 years of both the reserve and breeding ospreys and we can’t wait to see what the rest of the season has in store.

“Thanks to players of People’s Postcode Lottery, our team of staff and volunteers are watching around the clock to see what unfolds and protect these amazing birds from disturbance.”

Osprey eggs are  a similar size to a duck egg and incubation of each egg takes around 37 days.

They are also laid a few days apart, meaning a full clutch of three eggs could be laid by early next week.

Sanjay Singh, senior programmes manager for the People’s Postcode Lottery, said: “Our players will be delighted with the news that LF15 has laid her first egg of 2019.

“Their support is helping the Scottish Wildlife Trust’s team keep a close watch over these inspiring birds of prey over the coming weeks.”

The Loch of the Lowes visitor centre is open daily and has 24-hour access to the reserve hides.

The trust’s live osprey webcam also enables people from around the world to follow events as they happen.

Meanwhile, at Loch Arkaig in the Highlands, an osprey nest which was struck by lightning and raided by a pine marten last year has welcomed back its resident pair for the 2019 season.

Louis and Aila arrived at the Lochaber nest together shortly after 7pm on Thursday night, and began mating attempts within minutes.

Louis was seen delivering his first fish of the season to Aila on  Friday morning.

The Woodland Trust Scotland hopes to see eggs laid before the end of the month.

In 2018 three eggs were taken by a pine marten however the birds stayed around, but the camera then went dark after being struck by lightning.

The kit has now been completely refurbished with a back-up second camera fitted and the live stream will run until the autumn.

George Anderson, of Woodland Trust Scotland, said: “It is such an emotional moment to see the birds back on the nest.

“They look in fantastic shape. Fingers crossed they will have a more successful year.”